The Supremacist Court ruling striking down a century old sensible and necessary gun law continues to bear fruit.  Justice Ginni Thomas wrote, that government can't limit the open carrying guns in public for "self-defense" and yet again the Republican Party continues to use the Second Amendment as a Murder-Suicide Pact as since real life isn't a video game it's impossible to tell a good guy with a gun from a bad guy until he kills you.

As President Biden deftly noted, ""This ruling contradicts both common sense and the Constitution, and should deeply trouble us all."

And so... Six people killed at a 4th of July parade in Highland Park when a teenaged white male opened fire with a rifle from a rooftop.  The AR-15 continues to make gobs of blood money for Gun Manufacturers and the Republican Party.

I don't want to attack or insult victims of this shooting but, when WBEZ published multiple quotes from witnesses saying how could this happen in a safe community like Highland Park it brings up so much bile as people have become conditioned and numb to gun violence.  Gun violence only happens in Chicago... gun violence is associated with urban blight and inner city decay not affluent suburbs.

And this, this is the goal of the Republican Party; to make the Untied States of America ungovernable. Going all the way back to Ronnie Raygun's Nine most frightening words in the English language to the Lawless Opus Dei SCOTUS rulings stripping women of their citizenship, rights, and dignity and declaring that Congress and the Constitution are Unconstitutional to the Sinister Six Supremes, the Republican Party slow-moving coup is to drown the US Government and replace it with a fascist facsimile.

Every one of these latest rulings; gutting the EPA, unleashing gun violence, enforcing Republican gerrymanders, stripping women of their humanity and protection under law are designed to impress upon you the futility of your resistance.  To bludgeon you into depressed cynicism or resigned acceptance that Republican government is inevitable.

And through non-stop repetitive propaganda about migrant caravans or looting Antifa or out of control crime Republicans condition their followers to cling tighter to their guns and fascist fundamentalist religion.

Time for more worthless thoughts and useless prayers from the pro-gun violence rightwingers who get aroused and ecstatic at the prospect of another shooting in Illinois.  Social media will be festooned with that's what you libtards get for voting DemocRAT.  Again and again guns destroy dozens of families and punch holes in the fabric of America but, because the statistical odds are very low that you or someone you know and love will be killed by gun violence Republican malfeasance will continue to extract an unspeakable toll. 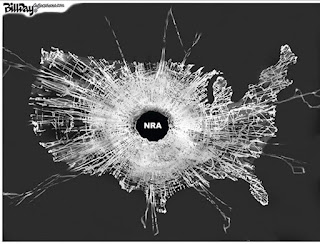 Here's an Instagram Reels video of the shooting as you can hear the rapid fire shots ringing out but read the despicable and lunatic comments about Martial Law in Chicago and a CCL holder coulda taken him out.  Gun Nuts are just Bigots wistfully hoping to be The One who proves the fantasy right about good guy with a gun like they're John Fucking McClaine in Die Harderer.

What's become totally predictable with these mass shootings is that the shooter will be a young white male and that his weapon of choice will be an Armalite rifle. The big difference with the Highland Park shooting is the shooter apparently was not as intent on committing suicide by cop as mass shooters usually are.

Nan, since the shooter doesn't fit the profile of whom Cops are trained to target and shoot 90 times in the back while running away he probably joined in the crowd fleeing the scene. Kyle Rittenhouse and Dylan Roof showed them the way so they will copy their hero.