The Aftermath of Highland Park: We now return you to your regularly scheduled refusal to enact Gun Control

6 Lives lost.  25 more people with life-long gun shot wounds.  Hundreds if not thousands traumatized.  A community shattered...  Why does none of this matter to the Gun Lobby and Gun humping fanatics?

This is to say nothing of the economic impact from yesterday.  Hundreds of Officers called in to look for the suspect, Bobby Crimo.  Parades and firework shows all across Lake County and northern Cook County cancelled for fear of a copycat, an accomplice.  Think of the Return on Investment one man with an AR-15 extracted in terms of damage.

Because we can not have gun control and civilization in America look at the absurd work arounds Republicans and gun nuts offer up:  First off no one with a concealed carry was going to stop this incident the shooter had an elevated position and a rifle but just as with Las Vegas, gun nuts keep making this ludicrous argument.  Next, let's turn all of our schools into solid concrete pillboxes with no windows and with one door.  Let's fill the hallways with Veterans with PTSD give them guns and no other job than to wander around, armed, aimlessly.  This sounds like a dungeon lair from D&D.  And now, anytime 2 or more people gather let's employ snipers on rooftops to ensure once the shooter starts killing people we can get a bead on him and kill him with fewer casualties. 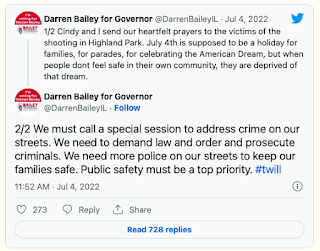 But, as pig fucker Darren Bailey's ignorant tweet demonstrates, Republicans do not fucking care.  Darren Bailey tried to connect this to "Crime in the streets" i.e. Chicago.  Darren Bailey is the Republican nominee for Governor in Illinois and is everything a modern Republican is; bigoted, ignorant, shameless, vile, and beholden to gun makers.

As the suspected shooter is now in custody (good work by the Officer who spotted Crimo's car), it's time for the gun nuts, firearms industry, NRA, and their paid off thralls in the Republican Party to move to the next phase of a mass shooting incident.

Denial.  Deflection.  Obfuscation.  And above all, Lies.

Change the subject!  Run out the clock!  Blame video games.  Or doors.  Anything to avoid the obvious.  The inescapable fact.  That it's the guns.  It's the fucking guns.  It's always been the guns.  That the way to curb gun violence is too limit guns.  AR-15s are fueling these mass shootings and they shouldn't be readily available.  Did the suspect purchase his rifle on "layaway" like the Uvalde shooter?  Kill now, pay never?

Oh hoe! Don't tell a right-winger he shouldn't have an AR-15 because he'll loudly bellow it's his right and if you suggest passing gun laws he'll declare he will commit mass murder on you and anyone else who'd dare pass laws and try to limit mass murders.

We, the People are in an undeclared war with the Firearms Industry and their allies the NRA and Republican Party.  It's an asymmetrical war.  The Gun Industry buys politicians through their Russian-funded propaganda arm the NRA and cultivates a fanatical core of hard gun nut zealots who shout [MORON* LABE] and SHALL NOT BE INFRINGED whenever gun regulation is spoken of.

And now it's probably too late.  The Gun Industry has flooded America with guns.  It's a pollution which requires decades of dedicated work to undo and we can't get started because any attempts are meet with moneyed resistance, underhanded rightwing political shenanigans, and overt threats of violence from conservatives.

Conservatives aren't about to give up their AR-15s now anyway they plan to use them very soon to overthrow the Biden Presidency and assassinate Democratic Representatives and Senators.

A video posted to Crimo's YouTube page on Jan. 2, 2021, appears to show Crimo among a throng of protesters cheering for Trump's presidential motorcade outside an airport. Crimo flips the phone's orientation to reveal his face at the end of the video.

One of the many vile things about the gun nuts is their insisting that the problem is everything except actual access to guns but refusing to provide any funding to address the stuff they claim is the real problem. Do you ever see any of the RWNJs pushing hard for increased funding for more counselors in schools or adding staff to mental health clinics?

"Mental Health" has always been a dodge in the Rightwing playbook. Delay delay delay... Republicans adopted the run-out-the-clock NBA defense and have been running it for decades because they know that eventually people will forget and return to their day to day lives and have you seen the price of gas???