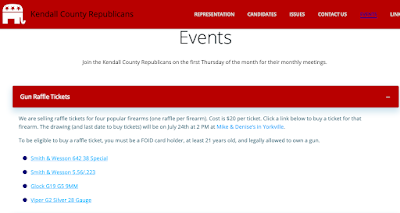 As we learn more about the dysfunctional malcontent drunk Crimo family and the how rabid Trump supporter Bobby Crimo's father sought to avoid gun control regulations and ranted about saving the Second Amendment in the wake of the post Uvalde shooting fallout before going out and up arming his son for the 4th of July, understand the Republican plan for decades has been to hamstring and undermine firearms regulation while also supporting targeted Supreme Court cases to make gun control unworkable.  Then as gun violence has predictably gone up to point out how gun control doesn't work.

Couple this with non-stop lies from John Lott and the non "CDC self defense" from the 1990's which purported to show millions of defensive gun uses a year and this has worked brilliantly for Republicans, the NRA, and the Firearms Industry to flood America with guns whilst they soak in the blood money which has come with it.

The Republicans plan is to make America ungovernable and then replace the United States with a Fascist Fundamentalist Slave State.

This country is so fucked up it does not appear at this time we can get sanity back.