Remember when Major was biting all those Secret Service agents? Hint: Donald John Trump is a piece of shit traitor. 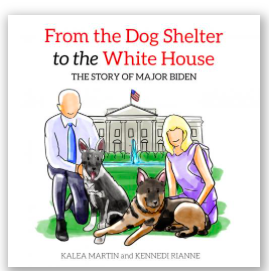 A common trope in movies and television is dogs can sense, smell or otherwise detect evil in a character.

But, sometimes movie cliches come true as apparently 3 year old German Shepard Major Biden was able to tell that some Secret Service Agents were actually bad guys!  And recall Traitor Trump didn't have a dog because what dog could stand being around that fat lazy fucker.

It appears quite obvious the US Secret Service deleted an unknown amount of messages from the 5th and 6th pertaining to the January 6th TrumPutsch attempt to overthrow the US Government.  The prospect that a segment of the US Secret Service was so Trumpified that they considered any fallout or punishment from deliberately deleting incriminating text messages more palatable than the revealing the body of the text messages does not fill me with much confidence.  Praetorian Guards long ago learned they could make or unmake the Chief Executive.  Remember President Biden and his staff where worried about the agents on the Presidential protection detail he called back to the agents who were previously on his Vice Presidential detail.

"I'm not getting in that car Tim," Mike Pence said as he knew the Secret Service Agents tasked with retrieving him were under the direction and orders of Donald John Traitor Trump.

It seems quite possible Pence would have been forced to declare the 2020 election invalid and if he didn't well, that information was deleted in the two days worth of text messages currently "missing".  On Jan6th US Secret Service agents tasked with protecting Vice President Mike Pence, as the Trump Mob descended, asked colleagues over comms to tell their families 'Goodbye'.  As Trump inspired Insurrectionists got closer to the final safe point of Pence, the "VP detail thought that this was about to get very ugly".

I have no doubts that if the rightwing domestic terrorists who descended upon the Capitol had located Pence, Speaker Nancy Pelosi, and other Democratic Representatives and had been able to bring in their pre-planned and staged QRF; firefights and executions would have occurred in the US Capitol building.  Traitor Trump was not sending the National Guard, Trump had replaced the command staff of other agencies which may have responded to the scene, Trump and his cabal had planned for a BLM counterprotest to absorb local D.C. police forces.

This House Committee is absolutely burying Trump.  Absolutely devastating testimony from mainly Republicans.  Unbelievable video.  If for nothing else, it is necessary for the Soul of the Nation, that this be recorded for All-Time; that Conservatives, elected Republicans, and rightwing paramilitary terrorists worked in conjunction with one another to undo the democratic constitutional election of President Biden in 2020.

Meanwhile, the Office of Inspector General for the Department of Homeland Security has begun a criminal probe into the actions of the Secret Service and the agents.  Here's hoping for the worst scenario for the Agents as the deleted data is recovered and the face the prospect of the coverup being uncovered.