What caused my return to Christ, an atheist's reawakening

As I was driving through soul crushing Chicago rush hour traffic, a small gray Toyota Corrola whizzed by me and on the back I saw Don't Let the Car Fool You My Real Treasure is in Heaven.

I realized at that moment that indeed God was real. But, the car had another message. Riches on earth did not belong to the fervent believer but to those who have another Religion.

This theory is hardly new, as the above quote relates, but what I did realize is that the Corporatists have sought to replace god as another means to control the working class.

The Serfs who toiled and labored under nasty and brutish conditions "enjoyed" more time off work, nearly a half year thanks to Feast and Mass days, than most workers in America do today.

Americans today are working longer hours, for a stagnant pay scale, and taking less time off than those Medieval Serfs. There are many reasons for these conditions, some stemming from the Reagan Revolution of supporting Corporate Welfare on the backs of the Middle Class. But, to the point of this post, Capitalism has absorbed many of the attributes of god.

Capitalist Demagouges abound in this Nation. They pontificate about the miracles associated with Capitalism. Capitalism has created the frozen TV Dinner! Alleluia! Capitalism has turned worthless black sludge into petrol! Free Market be praised!

Last year, when 32 Chilean miners were saved from being trapped under ground. Daniel Henninger, a blinkered Capitalist Priest, jumped forward and declared, Capitalism Saved the Miners: "It needs to be said. The rescue of the Chilean miners is a smashing victory for free-market capitalism."

Conservapedia had on their main front page: Bad News for Liberals Once Again. Pure Capitalism and the free market saved the miners. 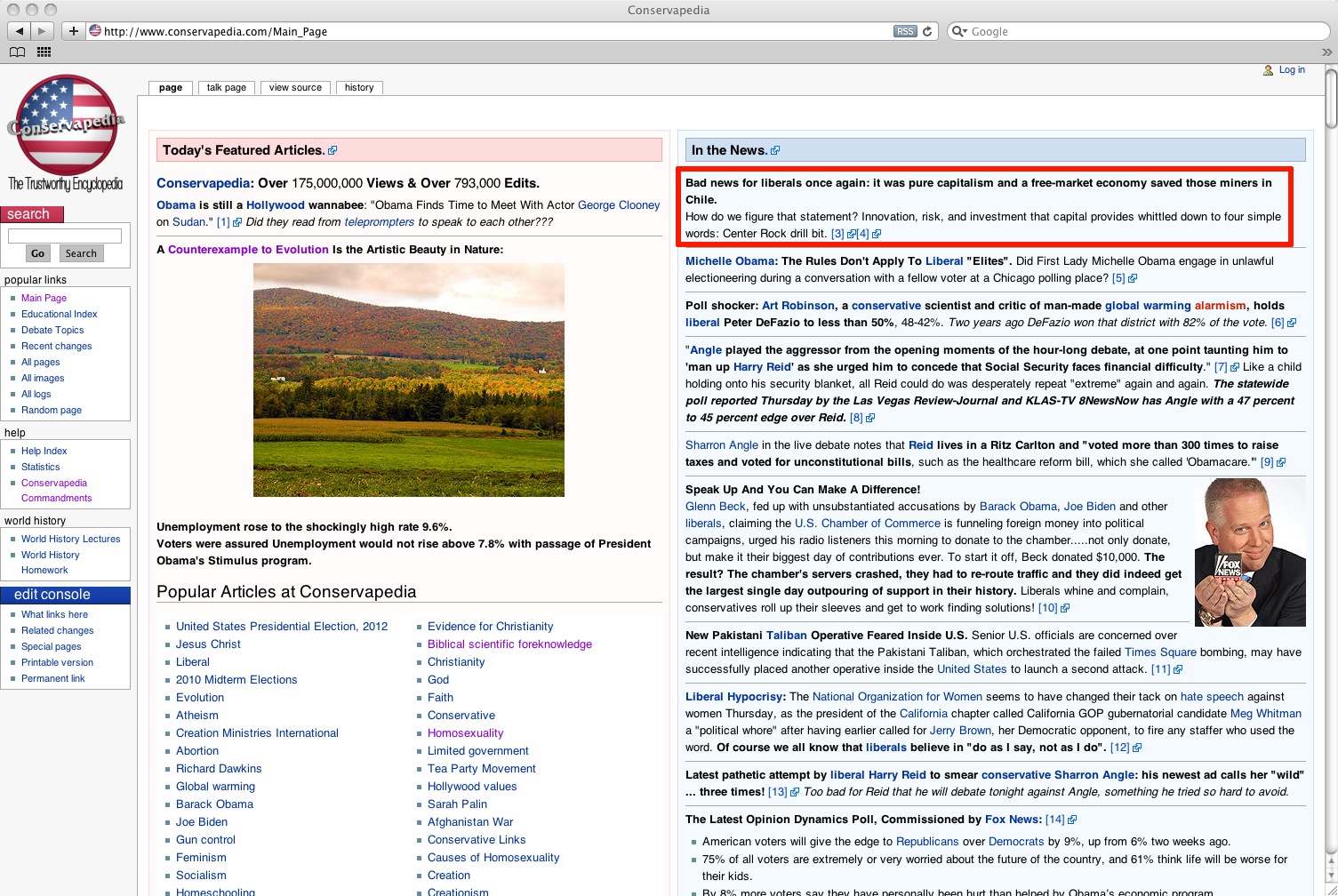 The only thing Capitalism has ever done for Miners is kill them.

The most recent example being the Upper Big Branch Mine Explosion on April 5, 2010, which took the lives of 29 miners. The murderous tragedy happened because Massey Energy is an adherent of Unfettered Capitalism, who purposefully and systematically ignored safety, circumscribed government regulations and manipulated elections in order that they could run their mine on the principles of Capitalism.

Of course, in America there have been many mine disasters. In 1947 in Centralia, Illinois a mine explosion killed 111 miners. This murderous capitalist disaster is mainly known of today because Woody Guthrie (and later Bucky Halker) memorialized them in "The Dying Miner".

But, these and the myriad other incidents of Corporate malfeasance are ignored by the priesthood and thus unknown by the duped and brainwashed flock, who mouth the hosannas of Free Market and Capitalism, without knowing what they are doing is creating and then reinforcing a neural pathway of bondage to those who view the majority of the world as replaceable parts.

So, for the sake of more time off let's supplant the new god of Capitalism for the older christian god...
Posted by Grung_e_Gene at 6:00 AM 4 comments:

This is What Republicans Believe: They get Medicare, You Don't

Everything done by the Federal Government is Socialism... Unless it benefits Republicans and their Corporate Masters.

Rep. Rob Woodall (R-GA) had to put the plebs from his district back in their place with a town hall meeting, when some non-Republican person dared to question him!

Ilene Johnson, a Democratic activist who lives in Gwinnett County, "You take government-subsidized health care, but you are not obligated to take that if you don’t want to. Why aren’t you going out on the free market in the state where you are a resident and buy your own health care?"

Woodall went on to claim, "Folks, if you give people things for free, don’t blame them for taking them." First off stop with the usage of the term 'Folks'. It doesn't make you seem aw, schucks small townish. Second, Woodall probably thought he was winning points with the crowd with his subjects by educating them about how Medicare is a free service for 'welfare queens' but as always Republicans lie.

Medicare, Medicaid aren't "things for free". They are programs which have been bought and paid for by the American People. And what the Republicans and Paul Ryan are trying to do with their 'Here are Some Coupons go out and try to get Cancer Medication' Deathcare plan is steal that money.

"So, Ruth Marcus, what wins here, bold leadership on Medicare and the argument that the Democrats won't do something courageous or the Democrats who say, hey, those guys want to take away my medicare?"

It's Bold! It's Courageous! Forcing old people to try and pay for their healthcare with a quickly devalued coupon? Forcing sick children to get coverage from Insurance Companies which are caught cheating those children out of coverage now:

When it comes to Medicare, everyone in America, a nation of 300 Million persons should be aware that the 300 Never-Done-An-Honest -Days-Worth-Of-Labor Republican Bureaucrats have been instructed to destroy it and replace it with Paul Ryan's Deathcare Program.

It doesn't matter 80% of the American People dislike these Republican policies because the GOP ignores the will of the people and serve the interests of Billionaires. But, the blatant hypocrisy is galling. Republicans don't even care. They lie to cameras, they lie to consitutents, they lie, lie, lie. Because, even if they do get voted out their families financial future is safe and secure. All these 2010 Teabagged Republicans enjoy lifetime pensions. They see no problem in slashing your benefits while ensuring they will continue to get them.

And all they have to do to win this financial security is cosign We, The People to Perpetual Wage Slavery.

"Labor is a commodity just like corn or beans or oil or gold, and the value of it needs to be determined by the competition, supply and demand in the workplace," -Steve King (R-IA).

You are nothing more than a non-durable good, a cog, in the machines of Industry and War and the Republicans have no problem telling you your value, wage slave.

And they'll gladly do it with a ready lie on their lips but, by hook or by crook, the Republicans are going to force America into perpetual bondage in service to their Plutocratic Masters,

"[O]ne way or the other, either through the Supreme Court or the legislature, these reforms will be put into place," Scott Walker, Koch Governor.