From Russia with Love; Donald Trump pawn of Putin and the hacking of the American Democracy 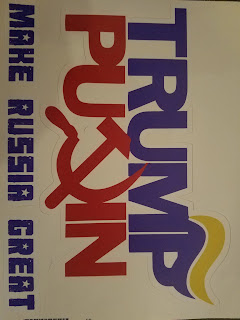 The Republican Party knew the Russian Government was hacking the 2016 Presidential Election and they did not care.

Cheeto Benito Trump requested Putin and Russian hackers conduct cyber-attacks on the United States and conservatives not only didn't care they cheered it on.

I don't ever want to hear a conservative talk about Love of Country and Freedom ever again. Conservatives have choosen to undermine the United States, her elections, and her governmental institutions with the assistance of a Foreign Power.

I don't ever want to hear a conservative talk about Treason, Conservatives and their RepublicaNazi elected officials have sided with a foreign government against their own fellow countrymen, they are the definition of Traitors.

Conservatives have been in love with Putin for years. Conservatives are drawn to an authortarian strong-man. Everything coming from right-wing should be understood coming from Traitors. When reporting on Trump and the Republican Party, the lede should be Today Trump lied about this... or The Traitorous Republican Party enacted a policy which seeks to harm 1000's of Americans...

Trump is wholly owned by Russia and in hock to Putin. When Trump suffered one of his multiple bankruptices, Putin bankrolled him with the understood agreement they would be paid back. Well, that tab has come due and Putin is going to be paid back.

Putin's been controlling Trump for years. Melania is a Russian Agent whose mission has been to control and direct Donald Trump at Putin's Behest. Sure, it's a disgusting job for her but for Putin it's been a Bigly Success and the Republican Party does not care.

Adding in the friction over Syria, Putin needed a weakening of the United States and saw their chance with the clownish Trump and evil agenda of Trump's cabal of conservative neo-nazis, Trump and the traitorous Republican Party are set to devastate the United States from within and eliminate our abilities and reputation abroad.

This is The Beginning of the End of the Democratic Republic. Of course, this smacks of hyperbole, as people have been speaking of the end of the Republic since 1800. But, only Tojo, Osama Bin Laden, and Robert E. Lee have done more damage to the United States than the Republican Party and their bevy of conservative neo-nazis. Now we have the admission that a political party openly invited a foreign government to mess with our elections and that party not only didn't care they requested that aid to gain power.

Conservatives are set on doing what Putin's Soviet Union failed at; Destroying the United States.

Update:
In an explicit quid pro quo , Trump had nominated Rex Tillerson for Secretary of State.

As CEO of Exxon Tillerson worked out a $500 billion dollar deal with the Putin's state oil company. President Obama's sanctions on Russia for Putin's warmongering in 2014 cancelled this deal. Now that Putin has helped Trump sneak into the White House with less votes. As Trump is Putin's Pawn he dutifully paved Tillerson into Sec of State to push the deal through.
Posted by Grung_e_Gene at 8:38 PM 8 comments:

Heil Trump! MAGAmericans will be the new people and under MAGA Conservaive Neo-Nazis shall rule

In 40 days the Republican Party will begin dismantling the social safety net, eliminating Government, and instituting MAGA across the land. MAGA will replace all other forms of patriotism, governance, and free speech in the country. So what do I mean by MAGA?

No longer will Americans be paid in near worthless federal reserve notes (End The FED!!!), instead MAGA Bux will be available to use in Donald Trump's Food Banks (no Trump Steaks for certain people), or Mike Pence's cultural approved centers (No Hamilton!), or to trade in for vouchers for Paul Ryan's CouponCare or the newly created MAGAcare!

MAGAcare will "quickly" and "efficiently" replace the ACA and the failed policy known as Obamacare. Under MAGAcare, poor Americans will have the option to die quickly but, with out the onerus burden of receiving care under the evil tyranny of Obamacare.

Political Correctness (PC) will be eliminated and will be replaced by Patriotic Correctness (PC). Under the New PC, MAGA Speech will be the only speech code approved by Trump and his inner cabal of Conservative Neo-Nazis and accepted by MAGAmericans. Forms of unacceptable speech shall include criticizing Donald Trump, protesting Republicans, rejecting military control of the Government, watching TV other than Faux News or The Apprentice, reading internet sites unapproved by Breitbart, burning Confederate Flags, and refusing to salute during the new National MAGAnthem, these will be punished by MAGAexecutions.

MAGA Lives Matter will quite naturally replace All Lives Matter as MAGAmericans recognize that only their lives matter. Especially since Director of Homeland Security Sheriff David Clarke will have declared Black Lives Matter are terrorists thus allowing the MAGAparamilitary to unleash peace keeping operations on #blm and all those associated with it. MAGAexecutions will swiftly follow as anyone who supports or identifies with #blm will be automatically be a threat and the MAGA Homeland Security agents will always be in fear for their lives.

The EPA will transition into the MAGAPA, a new federal regulatory body which will ruthlessly track down and eliminate the #NODAPL criminal protesters (more MAGAexecutions), and fast track the pipeline, safeguard the inalienable rights of pollution factories to dump petcoke along the Calumet waterway, mercury (HG) into the Great Lakes, rain down lead dust on nearby towns, and spill any other toxic waste into the air and waterways on their property, which are sometimes erroneously referred to as the commons or America.

The Departments of Education shall henceforth be the Department of MAGAducation and the Department Labor will become the MAGAwork. MAGAducation will focus on the conservative truths about America; how there was no one here in the New World when The White Man arrived and even if there were they weren't strip-mining and deforesting the land so they weren't really using the place. And the new MAGAwork will ensure that all Americans are given the freedom to work for as little as possible, eventually transitioning to free labor in order to achieve 100% employment. MAGAwork will set US free.

The 2nd Amendment shall henceforth be known as MAGAmendment and be the first and last argument, especially when some libtard starts speaking that Old PC garbage and tramples on MAGA speech.

In all seriousness, liberals need to start formulating a plan of action and need to hold the Democratic Party to it. That plan should include all manner of parliamentarian rigamarole, political brinksmanship, and outright chicanery.

Because playing by the norms and rules of the system is a receipe for the furtherance of right-wing fascism. RepublicaNazis began their descent into fascism with Nixon's southern strategy, fully embraced it with the addled Raygun's faux cowboy diplomacy, ignored decorum with the hunting of President Clinton, stole the Presidency in 2000, obstructed and derailed the Government through President Obama's tenure, and are now set to inaugurate the worst Government the world has seen since 1932. All of these have been frowned upon by Democrats as they expected Republicans to uphold some traditions and were reluctant to confront the conservative neo-nazi advance.

The time for Gentlemanly governance is past. RepublicaNazis have completely abandoned even the semblance of cooperation they will stop at nothing to advance the right-wing dream of Neo-Feudal Wage Slave Nation. The Era of Conservative Neo-Nazi Fascist MAGA is upon us.
Posted by Grung_e_Gene at 2:58 PM 12 comments:

"Will you please stop saying that word? My daughter is listening." Scottie Nell Hughes, who knew the word she was referring to was "facts".

Trump surrogate and good little bundist Scottie Nell Hughes caused a bit of a furor this December when she stated,


"One thing that has been interesting this entire campaign season to watch, is that people that say facts are facts - they’re not really facts. Everybody has a way of interpreting them to be the truth or not true. There are no such things, unfortunately, as facts. So Mr Trump’s tweets, amongst a certain crowd, a large part of the population, are truth."

This is not the first time a conservative has stated "there are no such things as facts", No less a luminary than Ronnie Raygun himself stated "facts are stupid things." And Karl Rove was sickeningly prescient when he spoke of the of the RepublicaNazi reality, "[W]hen we act, we create our own reality. And while you're studying that reality—judiciously, as you will—we'll act again, creating other new realities..."

Scottie's comments are just conservatism distilled down to it's basest form; pure propaganda. There are no facts to right-wingers there is only the ever evolving narrative which conforms to whatever they believe and aids them in quest for Power. The natural end-state of right-wing beliefs is a boot stamping on a human face forever,

In this quest for power, conservative neo-nazis readily believe Trump actually won the popular vote because millions of illegals voted at the behest and urging of Kenyan Marxist Usurper Barack Obama. Those are the facts.

Of course, CNN is doing their best bringing on Trump surrogates and former elected Republicans New Hampshire State Representatives and portraying them as regular everyday white people who when pushed to support their "facts" respond just google it, because anything you want to believe can be found by googling it.

Addendum:
A decade ago John Stauber released The Best War Ever about the RepublicaNazi propaganda efforts to dupe the American people into supporting the Iraq War. Stauber talked about incestuous amplification that the Bush/Cheney cabal began to believe their own propaganda as the war dragged on and did not conform to right-wing lies of Mission Accomplished and ended up fooling themselves.

What Stauber and most people didn’t appreciate, myself included, is the Bush/Cheney cabal didn't end up deluding themselves, they always knew they were spreading lies.

Donald Trump saved 1000 jobs at Carrier! Or so right-wingers would have you believe.

In reality United Technologies Inc was given $7,000,000 in taxpayer money from the state of Indiana, to refrain from moving their subsidary company Carrier Corp Heating and Air Conditioning manufacturing to Mexico.

As was easily predicted conservatives are readily carrying Trump's water and proclaiming this a miracle of Trump business acumen. MAGA in action! Little Alt-Right darling Tomi Lahren took time out of her busy schedule of "not seeing color" to laud her MAGA Savior Trump over Carrier

Over at Breitbart, (warning link goes to Nazi HQ) the official organ of the Trump Presidency, these "1000 jobs" are treated as 1000 separate miracles. Of course, the same conservative neo-nazis who decried, denounced and derided government assistance to General Motors, and typed thousands of hot takes from all corners of the fetid right-wing diarrhea internet chuckled at their turn-of-phrase, "Government Motors". Ho ho ho!

Now, as always the conservative neo-nazis over at Breitbart who so vociferously proclaiming this an unparalled success have ZERO connection to Carrier and are simply commenting to help "catapult the propaganda", while they have fun insulting liberals.

It's going to be a long four years of right-wingers proclaiming everything Trump does a MAGA success while decrying liberals at every turn, and blaming everything else on President Obama.

Because despite their pouting that Obama had to stop blaming Bush circa Jan 21st 2009, Conservative Neo-Nazis hold grudges forever, still blame President Carter for events 30 years later, and are busily working towards turning the Nation into a Wage Slavery State, while happily affixing chains of corporate bondage to all of us.

A solid link in the chain of corporate bondage was forged in Indiana because that $7,000,000 will have to come from somewhere and the conservative neo-nazis are always ready to kick the poor.
Posted by Grung_e_Gene at 4:58 PM 15 comments: