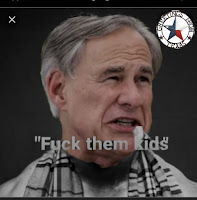 Seriously, when Ted Cruz or Greg Abbott threatened to secede from the Nation we should have taken them up on their offer.  Get your fanatic fascist asses the fuck outta here.

Asshole Texans kept taking to social media to demand people stop Californiaing their Texas (because rightwingers are drones who have no imagination they all repeated that comment).  Well, stop Texasing Up my United States.  Honestly, without the civilizing influence of the liberal states, Texas would be Saudia Arabia, Iran, or Russia, a brutal inhumane pariah nation which only gets attention because of its' resources.

Certainly, we should demand Texas reimburse the United States for absorbing their National Debt of over $10,000,000 in 1836 adjusted for inflation and with interest applied and demand repayment for all the infrastructure we've built in that shithole State.  Texas has been at the forefront of advancing fascist rollbacks of human rights in their quest to be the shittest of the shithole States.

President Biden issued a decree which says too bad your vile State Law outlawing necessary medical care for women is not legal and does not trump Federal legal supremacy.  In response, known criminal Ken Paxton, who flouts laws and gets away with it by being powerful white Republican male, filed a lawsuit against the Federal Government filled with all the agitprop conservatives have been fed to hate "Big Government";

President Biden is flagrantly disregarding the legislative and democratic process—and flouting the Supreme Court’s ruling before the ink is dry—by having his appointed bureaucrats mandate that hospitals and emergency medicine physicians must perform abortions.

What a load of Texas Bullcrap.  Conservatives actually love Big Government it's just they expect and want a government that afflicts the afflicted and comforts the comfortable.  They want a federal government which brutally oppress minorities, sanctions women into second class citizens, and ensures that white male evangelical hegemony is ensconced into law.  Tough Talkin' Texans no longer threaten Secession because they've decided upon Subjugation.  Through multiple levers of bureaucratic violence Republican dominated states are exerting their will across state boundaries and obviously upon niches of the Federal Government.

Bureaucratic Violence is precisely what the Sinister Six Supreme Injustices provided Republicans as a weapon against Americans when they banned Abortion but, the Opus Dei Supremacist Court opened up a whole bunch of cognitive dissonance as well.  The mythical centrist can't believe the Republicans would actually institute total bans on abortions, as several states have done, even when the woman's life is in danger, the pregnancy is terminal or unviable, or the victim of a horrendous crime is a 10 year old child.

It must never be forgotten this is a key component of Fascism.  Deliberatly, lying and creating these untenable situations and expecting the victim of you policies to adapt or interpret your will is a key lever of power Reactionaries use.  Reactionary politics which arose in direct response to the liberalizing influences of 18th and 19th century political thought abuses the open society created by democracy and turn their opponents empathy against them.  For over 100 years, liberals have struggled in response.

The Republican Party is a wholly Fascist Reactionary Organization with no policies, plans, or ideas to aid the American People.