The worst thing anyone can do is to accurately describe Republicans and their political positions and beliefs.  This is an unforgivable sin in America today.  Yesterday, President Biden committed this crime. 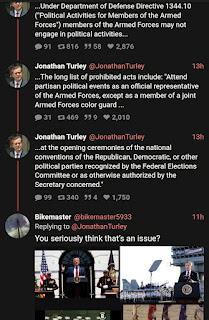 Flabby fascist Jonathan Turdley Faux News' favorite phony liberal claimed there was concern about the Marines on duty behind President Biden.  Turley is able to invent this bullshit because he knows his fans of Twitter don't understand or don't care about the difference Marines being on duty with Service Members attending partisan political rallies off-duty in Uniform.
Other Reactionary Magats made comparisons to Hitler, mainly because they have a paucity of historical knowledge but, also because Hitler and Nazi Germany is who they idolize.

MAGA Republicans are quasi or semi-fascists.  This is incontrovertible and demonstrable by their previous actions and current intentions.   Traitor Trump did not make them so but, found them eagerly awaiting a leader who would feed them the racist red meat they so desired.

So, when President Biden spoke to The Soul of the Nation, conservatives saw Hitler, Concentration Camps, and death squads.  They did so because Every Accusation Is A Confession (EAIAC).  Conservatives are aching for a Casus Belli (i.e. a cause of war).

And just as they did with President Obama and Jade Helm, conservatives are simply going to invent conspiracy theories and fabricate their justification for engaging in mass murder and terrorism. 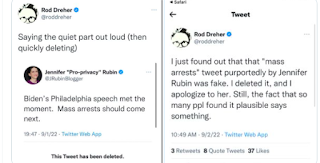 Rightwing propaganda is so successful that other rightwingers find fake tweets, amplify them, and when confronted with their falsity simply assert many people found the lie plausible.  The American Right as President Biden noted wants to use violence and not just to steal elections as they tried on January 6th.  No the MAGA Republicans want to round-up and exterminate millions of people in the United States of America.