Because "The Left" mistreated Willard Mitt R-Money I had to become A Nazi: A War on Women Tale

“Fox is watched by the true believers. We need to get the independents and the women.” —Willard Mitt R-Money (2012) Romney would then famously bring forth binders full of women and 10 years later Romney does everything in his considerable power as a US Senator to bind those women.

Ah, the detritus of posts begun but not finished.  I started this Republican War on Women post in 2012 before the 2nd Obama Victory and it's dispiriting to see some of the same bad faith actors and same rightwing bullshit still center stage.  Although fortunately, Racist Limbaugh is dead. 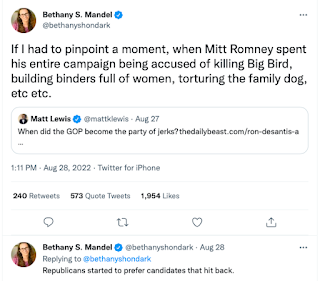 So, apparently a lot of Right-wingers are claiming "The Lefts" mistreatment of poor, poor Mitt R-Money forced them to become full-throated Fascists supporting Donald John Traitor Trump.  Here is rightwing psycho Bethany S. Mandel declaration.
This Mandel made her social media fame by declaring her son almost died from inhaling his own CO2 and boogers during Covid and then repeatedly lying about mask mandates and Covid, like many rightwing propagandists.
And, of course, like all things conservatives say Mandel's claim is dripping with disingenuous rationales and lies.  Romney is a liar.  Romney was an out-of-touch elitist.  Romney was a chickenhawk warmonger during Vietnam.  Romney is a vulture capitalist swindling pensions from retirees.  Romney was a High School bully who held a boy down and forcibly cut off his hair.
I know it's fashionable to speak of Senator Mitt Romney, as though he is an ally now, and yes he did vote for Supreme Court Justice Kentaji Brown-Jackson, the only male Republican Senator to do so, but despite facing imminent bodily harm on January 6th from Republican inspired Insurrection and the Conservative domestic terrorists who invaded the U.S. Capitol, Romney's core convictions about America, how the Rich should Rule, and the Republicans role in ensuring a Evangelical Plutocracy haven't changed.
Recall in 2012, while Mitt Romney was gleefully dancing on the still warm bodies in Benghazi, his poor little rich girl wife had been passed the torch from Sarah Palin, as the exemplar for American women to aspire.  (Conservatives would do this again with smelly GRU recruited Slovak hooker Melania Trump in 2016)  One of the ways Republicans use to Bind Women is to tell them to curtail their personal ambitions and experience Advancement and Power vicariously through one or a few Avatars;  Rightwing White Women whom the rest can look up to and support, while never challenging the subservient role of women in the Rightwing Universe
Sarah Palin is back (as always these rightwing thieves and criminals never leave) running for the now open Congressional seat in Alaska and no doubt feeling robbed of the limelight and lucrative grift which Lady Republicans like Boebert and Greene enjoy these days.
Anyway, Mitt Romney "supported" Ann's choice to stay at home and raise the children (because Mitt was actively engaged in pilfering millions in dollars from pensions and stealing money through Hedge Fund takeovers ).  But, Republicans viscerally fucking hate the poor (as evidenced by the Rightwing Reaction to the Biden Student Debt Loan Forgiveness) and Mitt's comments during his Presidential Run on working women highlight this; "I wanted to increase the work requirement. I said, for instance, that even if you have a child 2 years of age, you need to go to work. And people said, ‘Well that’s heartless.’ And I said, ‘No, no, but I want the [women] individuals to have the dignity of work.’”
Ann Romney gleefully supported Mitt's demand that Poor Women know their place and go to work while she luxuriated around TV interviews in her yellow bird $1000 dollar shirt,

"I love the fact that there are women out there who don’t have a choice and they must go to work and they still have to raise the kids."

Ann Romney also wanted to ensure those women didn't get any uppity ideas of not having to marry by being financially independent, "Why should women be paid the same as men?"
Of course, the Corporate Media couldn't be bothered with how the Romney's made their money (and it wasn't roll up your sleeves hard work) but, it took the work of Mother Jones to reveal The Romney's were Vulture Capitalists who preyed upon the poor and then shit on half the US population in the infamous 47% video.
But, let's be clear what's happening.  For decades Conservative have been flooding everything in America with bullshit, lies, and propaganda.  Their rightwing drones know nothing else.  So, conservatives are now whiny weaklings who are forever complaining about made up grievances and blaming Democrats and The Left for everything.  Conservatives invent things to be angry about so they can exist full-time in their Universe of made up grievances.  Hence the Mitt Romney retconning.
However, rightwingers are no longer satiated with rhetorical clubbing of The Left.  Conservatives want violence.  Conservatives want an unequal United States.  A United States of their Fathers'.  A White Patriarchy with clearly defined second and third class citizens who know their place, stay in the closet, while power and wealth accumulates at the top with minute amounts trickling-down to those lessers who should be grateful for the scraps thrown their way.  A White Nationalist State.
That's what this retconning of the Right's turn towards full-on fascism and violence is...
Posted by Grung_e_Gene at 9:18 AM