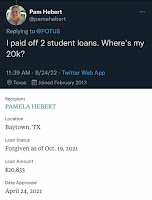 First of all, the Student Debt Relief plan President Biden has announced is one of the greatest Executive Actions ever done to aid working families in the United States and this infuriates Republicans.

And let's be totally clear; anyone who diminishes this, dismisses this, or calls it the "bare minimum" is a bad faith actor or a rightwing liar pretending to be a leftist.  This isn't just $10,000 in debt relief but, a whole host of additional benefits including a large amount of it directed at very poor Americans and minorities.

And if there is one thing which enrages Republicans it's when anything is done to help the American People.  The Republican Party exists solely to destroy the American Dream and crush We, the People. 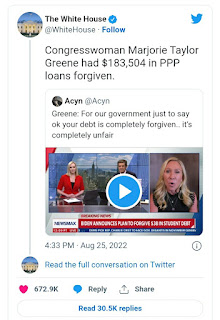 So it shall come as no surprise that when President Biden announced his Student Debt Forgiveness plan, Republicans were outraged.. and shamelessly decried the loan forgiveness despite receiving millions in PPP money free.  But, conservatives don't believe the money they receive through various government handouts are fraud, waste, or abuse but, their rightful due as Real Americans and giving Republicans money is the rightful mission of the U.S. Government.

But, for decades Republicans have dined out on the Corporate Media pushing there isn't a dime's worth of difference of between the parties.  And thus, it has allowed Republicans to run on their favorite issues emotional wedge issues.

Conservatives have been doing their worst to enrage the White Working class with CRT racism, #Antifa/BLM boogeymen, and Transgender phobia in their eternal effort to keep normie white people scared and running to their Republican daddy protectors.

Instead the long term Republican goal is to remove future options for the vast majority of people living in the United States; and thus creating an enormous underclass whom the 1% and the rightwing guard dogs can exploit.  Conservatives firmly believe the government exists to help them enrich themselves using government power.

So, as President Biden continues to deliver for the American people, Republicans will become more furious and more dangerous.

More dangerous for damn sure.

Absolutely, One Fly, conservatives now openly and proudly video record their violent rhetoric and active plans at murdering Law Enforcement and overthrowing the US Government on various social media platforms, confident that the once they get a shot at repeating January 6th, the Trump loyalists they install at all levels of government will never prosecute them for the murder and terrorism, conservatives plan to inflict upon minorities, women, liberals, Democratic representatives, Trans persons, recalcitrant FBI agents, and anyone else who refuses to swear allegiance to White Power.