As jail looms, will Traitor Trump call upon his Magat Horde to destroy America? 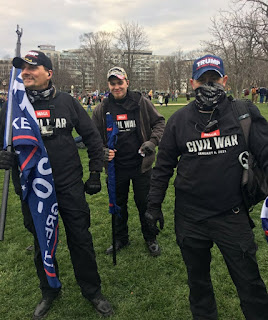 The FBI conducted a search via warrant of Trump's roach infested Florida hellhole Mar-a-Lago.  Most likely, to collect stolen classified documents but, additionally documents which pertain to Trump's treasonous months long campaign to overthrow of the US government from 11/03/20 to 01/06/21. And quite possibly documents pertaining to the various other crimes and schemes perpetrated by the Trump Crime Cabal.

We all saw how Trump's nasty, ill-tempered, syphilitic speeches incited the January 6th Insurrectionists.  Since, then he's not scaled back his lies and calls for political violence but fanned the flames.

The question is: When (not if) the DOJ comes to take him away will Traitor Trump call directly for his supporters to rise up and overthrow the US Government and plunge the Nation into an active rightwing revolution?

I don't know.  I do know enough Republicans are taking to social media, cable, news, and radio to proclaim this the worst action in American History and tell the Magat Horde that it is only a matter of time they come for you.  Conservatives for their part are yearning and begging to be given the go ahead to begin murdering millions of Americans.  And really over the last 30 years, anytime a Democratic Administration is in the White House, Republicans demonize law enforcement, threaten to defund the FBI, and stoke rightwing rage against the criminal justice system.  So, they need very little encouragement to begin the overt violence.

Trump has sometimes tried to be cautious in his statements, often after the fact, to try and avoid consequences as he's done throughout his putrid criminal life and with Republicans tripping over themselves to be outraged on his behalf and attack the Department of Justice, while indicted Jan6th terrorists threaten Civil War, I don't think Trump will need to call for Violence; conservatives are going to do it on their own.

I think so too. These hoards of gun-toting imbeciles are not reachable with logic or anything else. No way this is going to turn out good. I just don't see how given how mind-screwed they all are.

In reality, Trump is not the Be All, End All one true saint for Conservatives; he's merely the latest in the long list of Republican Traitors to garner their adulation. Now it's true Trump gave them something no Republican of extreme prominence has done in decades; given them the free reign to be as racist, bigoted, vile, hateful and violent as they want to be but, once he's gone conservatives will simply elevate him into the Pantheon of Racist Rightwing Heroes. Perhaps Trump shall be the once and future martyred Hero whose anointed Second Reign was stolen from them by Dark Brandon but, hatred for Federal Law Enforcement goes back at least to the 1960's when the Feds stopped bigoted conservatives from keeping minorities and women in their place through police brutality. It was at this point the idea of small government and state's rights gained prominence in rightwing ideology. The Feds are too woke and liberal goes back at least that far.

So, when Republicans don't win both House and Senate in 2022 and do worse on State Level and don't have a solid lock on swiping the 2024 Elections through bureaucratic legerdemain well... political violence, assassinations, and targeted terror campaigns are going to be the next choice for conservatives.