Trump exposed himself (and others) to Foreign Intelligence Operatives

Now when it comes to being a foreign asset I've always considered Trump to be more Buffoon than Blofled.  So, I think, most likely, Trump took these documents for his pretend Oval Office at Mar-a-Lago so he could play pretend President waving around classified documents to impress his guests and others.

Now, it's the others at Mar-a-Lago that are one of the problems;  as multiple actual fvcking spies have been caught inside the roach infested Trump swamp in Florida.

Recall the Chinese "business-woman", Yujing Zhang who had somehow made it past multiple Secret Service Agents and was found with the following items;

She was found to be carrying four mobile phones, a laptop computer, an external hard drive, and a thumb drive that “contained malicious software,” the complaint said. More electronics were found in her hotel room, along with about $8,000 in cash, according to the complaint.

Recall Traitor Trump wanted to host the G-7 2020 summit at Mar-a-Lago, and such diplomatic encounters are rife with foreign intelligence agents pretending to be simple aides to diplomatic envoys.  It's practically de-rigueur. 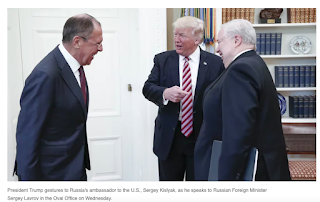 I'll never forget those two fvcking fat-faced Russian spies and war criminals, Sergei Lavrov and Sergey Kislyak, yucking it up with Donald John Traitor Trump in MY Oval Office and it was no surprise that Trump revealed classified intelligence to both of them.
And some Ukrainian woman stroked Trump's ego by pretending to be a Rothschild Heiress in order to gain access to every area in Mar-a-Lago,

Inna Yashchyshyn, 33, allegedly lied to members that she was a Rothschild heiress and mingled with Trump, Senator Lindsey Graham of South Carolina and others at Mar-a-Lago functions.

And of course, just recently it was revealed multiple covert assets have apparently been discovered and killed.

Jared Kushner's $2,000,000,000 from Saudi Arabia sure seems suspect given all we've learned about the Trump White House operations because the Trump State Department and White House leaked intel like a Sieve.

So, again while I think it's more likely all of these people played Trump by telling what a big, strong, huge swinging dick he is; there is the distinct possibility Trump simply sold TS/SCI classified documents to foreign governments for money.  And if that's the case, Donald John Trump needs to spend the rest of his natural life behind bars in a Federal Penitentiary.

Of course, the Republicans will never abandon Trump no matter what he crimes he's committed (and the documents recovered via Search Warrant already prove Trump's guilt) or what crimes he's going to commit.  Because it is quite likely Trump will call for violence and Civil War when it's announced he's going to be arrested.  And Rightwingers are aching for that Call.

But, that doesn't matter.  Conservatives long ago abandoned any pretense of caring about the Rule of Law; the Right is set upon a course of Ruling or Ruining America.

What you write is the reality certainly mostly correct. It's treason plain and simple and with most of his other crimes, the evidence is in the open. Republicans have zombie-like tendencies and it's fair to say that. Lemming like is another. The coup is ongoing and unstoppable at this time.