Do you Miss them, yet? Never Forget Republicans were in Charge 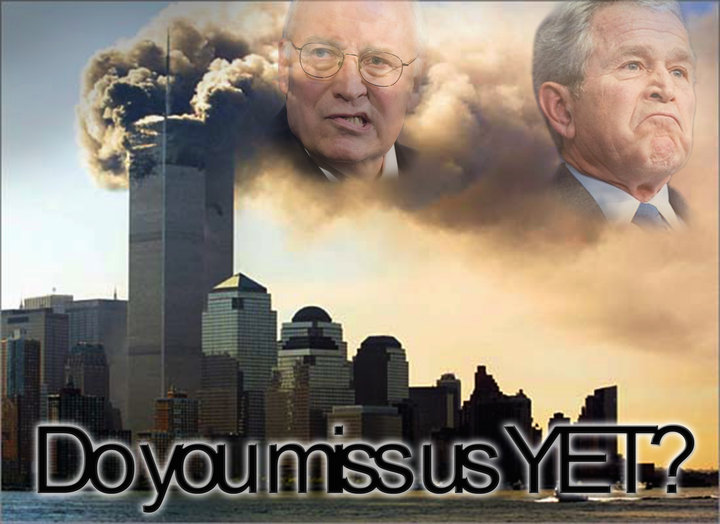 On the day America suffered the worst attack in our History, except for when Republican Heroes were killing Americans during the Civil War, what was the focus for the Republican led Congress and President George W. Bush?

Well, Phil Gramm, along with Republicans Jim Leach and Thomas Bliley had successfully repealed the Glass-Steagall Act removing a check on the rapacious Banking Industry and Republicans were figuring out how to shift even more of the Federal Tax burden to the Middle Class and Poor.

And while George Bush would sign any Legislation that would shelter his Base and Moneyed Masters from supporting the Nation, W was busy trying to figure out a way to invade Iraq. On January 30, 2001 George W. Bush directs Rumsfeld and JCS chairman Hugh Shelton to examine military options for Iraq.

"From the very beginning, there was a conviction, that Saddam Hussein was a bad person and that he needed to go,” says O’Neill, who adds that going after Saddam was topic "A" 10 days after the inauguration - eight months before Sept. 11. "It was all about finding a way to do it. That was the tone of it. The president saying ‘Go find me a way to do this,’" says O’Neill.

But Republicans of that Time were using the attacks of 9/11 to call anyone who questioned Bush and Cheney Terrorist Supporters and Traitors.

The Bush administration was well along the path to war before the 9/11 attacks. September 11 was not the motivation for the U.S. invasion of Iraq – it was a distraction from it.

9/11 and the Iraq War are enough to make The Bush/Cheney Regime the Worst in American History. But when you add on Torture, the Republican Recession, the blind eye to millions of EPA violations, the never explained nearly $5-a-gallon gas during Bush's Presidency and the Bush Regime pushed through TARP, a Bankers dream, wherein another Trillion in American taxpayer debt was grotesquely funneled directly to aid the Rich as a last Bushian Fuck You to the people... Well, what you have in George Bush and Dick Cheney are, perhaps, the two people who have done the most damage to America with the exception of Conservative Heroes Robert E. Lee and Jefferson Davis and Emperor Hirohito, Adolf Hitler and Osama Bin Laden.

Near Charleston West Virginia American families no longer have clean water to drink because the Bush Administration gleefully allowed Coal Companies to violate EPA standards and pollute the water table so badly that families are drinking a toxic sludge which is eating away at their bodies:

Jennifer Hall-Massey knows not to drink the tap water in her home near Charleston, W.Va.

In fact, her entire family tries to avoid any contact with the water. Her youngest son has scabs on his arms, legs and chest where the bathwater — polluted with lead, nickel and other heavy metals — caused painful rashes. Many of his brother’s teeth were capped to replace enamel that was eaten away.

Neighbors apply special lotions after showering because their skin burns. Tests show that their tap water contains arsenic, barium, lead, manganese and other chemicals at concentrations federal regulators say could contribute to cancer and damage the kidneys and nervous system.

In the last five years alone, chemical factories, manufacturing plants and other workplaces have violated water pollution laws more than half a million times.

Most Democrats, with all their flaws, try to represent everyone. Republicans govern exclusively for the benefit of criminal corporations and the richest 1%.

That is America's choice.

I heard once that Einstein said something about us never being able to escape the tyranny of the stupid.

Well, give em a break...they do have a new pledge to America...cut taxes, reduce government, stand up for America, make us safe...wait, that's the same as the...old pledge? Yep, thought it sounded familiar.

Meet the new pledge- Same as the old pledge.

Bush and Cheney should be prosecuted for war crimes and crimes against humanity. The republican party is a party of traitors, that's for sure.