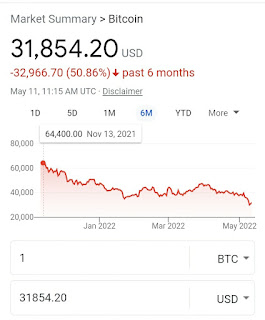 Bitcoin is a terrible commodity and borderline outright fraud.  Crypto, in toto, is a classic Ponzi Scheme.  Since I took that screenshot of the plummeting Bitcoin price it's gone down another $2000 while also fluctuating wildly.  In addition, there have been several other Crypto implosions and frauds exposing the volatile nature of Crypto, "Oops, Poor Again!" Changpeng Zhao.
I know some people who made "money" via Bitcoin a few years ago.  I always point out that when they speak about the Value of Bitcoin it's described in USD and not of the Crypto itself.  But, they also laud and describe Bitcoin as the harbinger of Utopia, as the panacea which will remove all the evils of globalist bankers and fiat currency and crime associated with money.  I've tried to point out the history for such loaded terms but, when you're a true believer and have made a "profit" from crypto it's trying to reason with an addict.
As I said, I pointed out that the "profits" my coworkers have made aren't an intrinsic value associated with Bitcoin or Tezos or whichever magic beans they're hawking but, because they've "acquired" other peoples' money.  But, trying to point out that the money they made was other investors losing money doesn't register because The Blockchain can never fail, it can only be failed, as it were....  Of course, so many people have bought into the Rightwing framing that there is no such thing as society (weepy bigot Jordan B. Peterson told them so) so they have no duty to anyone else and besides people are dumb investors anyway (Buy High/Sell Low) so why shouldn't they profit from other peoples' mistakes.
So, trying to get my coworkers to understand that our job as police should be too safeguard society and a government's primary duty is to protect people from rapacious thieves stealing from the untrained, or unsophisticated investors, or the gullible instead falls on deaf ears.
I seemingly can't get them to understand a group of unscrupulous Tech Bros have concocted a scheme to get people to invest real money while providing them digital chaff.  In my experience, Cops tend to be incredibly credulous about things while lauding themselves as having a fine tuned baloney detection kit.    Of course, we know the Crypto creators quickly transfer real money into their bank accounts.  It's the epitome of a Get Rich Quick Scheme;  Here's how to make money from nothing; gussied up with futuristic (and poorly understood) technobabble, don't worry you're definitely not the mark!
This is part & parcel of the pseudo-libertarian Ayn Randian belief in which everyone else is a mooch and a taker, while I am a great and noble and brilliant singular genius who would never be tossed into the charnel house when Government is done away with by the Powerful.
I don't look forward to these crypto rollercoaster rides because when it does go bust a lot of poor people and pensions are going to be swindled just like when the Bankers Housing Scam burst in 2007.  Of course, enough people have convinced themselves that they will be the last to get out and the other guy is going to be left holding the bag...
Apparently, Gotham's Finest Detective Ben McKenzie has quite an informed understanding of of the CryptoCon.
Posted by Grung_e_Gene at 4:01 PM

Gene -- excellent post. I continue to be amazed at the gullibility of people who can't see the scam. Gen X and Millennials, in particular, have the highest rate of crypto investment, perhaps because they're more entranced by the technobabble and thoughts of a quick path to early retirement(?). It's a disturbing trend. I'd told my Millennial children to stay away, but they already had the sense to do so without my telling them.

Thinking the same thing when I first heard NFT.