The Revenge of The Thin Blue Line 6: One More Cup of Coffee 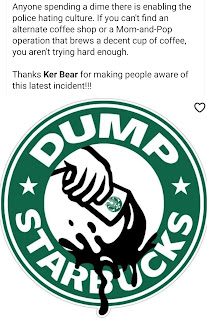 But I don't sense affection
No gratitude or love

The War on Police... For some reason Police Officers from Sea to Shining to Sea are lying about their daily cup of coffee. Two of the most recent examples of lying Cops and the Wurlitzer of Blue Line Lovin' come from Oklahoma and Kansas City but, Officers are not just blaming Starbucks (although Starbucks as illustrated is still the prime target).

In Oklahoma, an Officer claimed the barista printed the name PIG on the cup and the Chief of Police Johnny O'Mara jumped upon it to denounce Starbucks, get the barista and manager fired, and Black Rifle Coffee Company saw a chance to lick some jackboots and sell some coffee to police. Of course, the incident as dramatized in deleted facebook posts by the Oily Chief of Police O'Mara was a lie and O'Mara's daughter pointed out her father is a lying sack of pig shit and attention whore.

In Kansas City, an Officer saw all the attention being paid and decided he needed some of that sweet butt salve and claimed a McDonald's employee wrote in sharpie "Fucking Pig". The rightwing internet roared back into gear and denounced minimum wage workers, immigrants, the left, libtards, Cop haters, Democrats... but, then... the McDonald's Manager dropped the hammer. There's video and the video completely exonerates the employees. The Officer was forced to resign one day later.

Despite all the adulation, there are Officers who apparently feel they need more. Why? Well I do know one reason: It's straight-up Agitprop. Officers dutifully and uncritically regurgitate this shit and get themselves angry. Over and over Officers, supposedly trained to detect lies, fall for and perpetuate outright propaganda. Why?

Well, there can be many reasons but, for me it gets back to the reactionary victim mentality. Boo-hoo-hoo woe is me I'm a victim. Conservatives saw that as America changed, groups of people right-wingers had gotten away with victimizing for centuries, began to fight back and win in the Courts and... the Court of public opinion. Now in the social media era, conservative bad actors are eager to foment dissension and advance the rightwing agenda of oppression and intolerance via any means possible see claiming Victimhood as a winning strategy.

Hence the Coffee Cups and the War on Cops Agitprop.

*- I always request they make a donation to a local food bank.
Posted by Grung_e_Gene at 4:06 AM