Since 1998, when the Batman Franchise imploded under the weight of total camp and silliness, Marvel stepped up and 35 films based on Marvel Comics have been released.

The Amazing Spiderman 2, in a very poor showing, only held the Top Box-Office spot for 1 week before being knocked off by the juvenile movie Neighbors starring Seth Rogen and Zach Effron.

However, this is mostly because, The Amazing Spiderman 2 was awful. Modeled on the classic Death of Gwen Stacy storyline, the film simply failed. Besides the terrible special effects and the obligatory scenes of New Yorkers standing around gawking at explosions while NYPD vehicles exist only to be blown up, far too much film time was wasted on Electro's Origin, which followed the standard OSHA-violating industrial accident imparts super-powers to the victim who in reality would be dead.

The worst scene being the torture of Electro by the male Doctor Kafka, who wears make-up and listens to classical music while conducting experiments as an obvious cliched caricature of Doctor Josef Mengle. This character is made worse once it's understood that the inspiration for "Doctor Ashley Kafka" is an actual person.

One of the brilliant things The Dark Knight (2008) did was not show a villain creation scene for the Joker. Besides happening off screen, this also allowed Heath Ledger to taunt the audience and his on-screen victims multiple times with the 'Do ya wanna know how I got these scars?' line.


Instead of the cartoonish Electro created by genetically altered eels, why not just have Electro appear in New York rampaging and out for vengeance? During the course of the film, and I'm drawing off of Johnny Got His Gun, you can reveal this Electro is an eye-less, ear-less mouth-less electrically burned monster who can sense/manipulate electricity. Having been traumatized (perhaps by war or as an experiment for instance) and being little more than a charred corpse you can make him a lost soul who Peter Parker is forced to stop and is dismayed to learn he can not help.

One could argue such a film idea is too heavy or disturbing for a children's film? Well, ***spoiler*** Gwen Stacy does indeed die in the film. Though her death scene is, fortunately, not graphic.

Also why bring back the Green Goblin? However, it was accomplished the character would be compared to Willem Dafoe's excellent and psychologically frightening turn, in the Sam Rami Spider-Man film. There are many other Spidey enemies to choose from!

Of course, I would prefer the ultimate Spiderman Story of the 1980's; Kraven's Last Hunt. 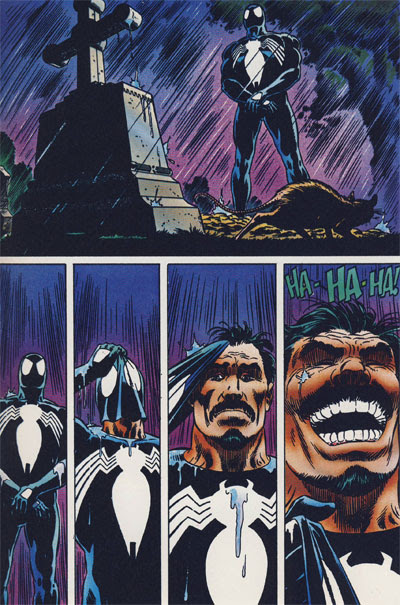 But, perhaps I should be glad Sony Pictures won't be ruining that storyline the same way they flubbed Gwen Stacy's death.

Now, these films run into problems because even the Elektra (2005) and Punisher: War Zone (2009) had 40 million dollar budgets and even that kind of money is going to entail meddling from people unfamiliar or uncaring about the original source material.

For instance, Ben Affleck's Daredevil (2003) committed the mortal sin, literally, of Daredevil letting a villain die. Daredevil, as the ultra-catholic, never kills and doesn't even let the scummiest of the scum die if he can prevent it.

The two Hulk movies (2003 and 2008) failed because the Hulk is an unworkable character for a stand-alone film. He's far too powerful, having literally carried a mountain range on his back in The Secret Wars. And the films end up with Hulk smashing a bunch of things and fighting a Hulk-esque enemy.

Iron Man 2 (2010) was an film which drew many detractors but, for the wrong reasons. I movie was fairly decent but was disappointed the film executives decided to give Robert Downey "palladium-poisoning", cured by Tony Stark's discovery/invention of a new element, as opposed to staying true to the source material and making Tony a drunk. The disease of Alcoholism, apparently being too heavy a topic for a film ostensibly marketed towards children.

The writers for the second Fantastic Four film (2007) apparently never read the Silver Surfer. While the decision to change Galactus from a big guy into an celestial monstrosity was fine, the Silver Surfer, that goofy footed philosopher has one line, "To Me, My Board"which must be included as the character swayed by the promise he sees in humanity turns on Galactus and fights for Earth.

Any film which doesn't include that line shows a lack of basic understanding of the character. Let alone the deeper Hegelian arc the writers undertook culminating in Issue 64 from 1992.

"On approaching the other it has lost its own self, since it finds itself as another being; secondly, it has thereby sublated that other, for this primitive consciousness does not regard the other as essentially real but sees its own self in the other." - G.W.F. Hegel, Phenomenology of Spirit

The Dark Surfer and the Silver Surfer engage in the struggle unto death, as they attempt to get the other to acknowledge their superiority.

Complaints aside several of the Movie Franchises have succeeded both financially while staying true-ish to the characters. The Captain America stories (2011 and 2014) have resonated quite well. The Avengers (2012) succeeded with it's blockbuster approach. The Wolverine (2013), adapted from the 1982 limited series, overcame the earlier dreck from the first solo Wolverine movie Origins. (Please Note: Any comic book movie with Ryan Reynolds is guaranteed to be bad.)

The problem is Movie Studios don't want to take any risks with these stories. They'll go for what they think will make the most money as opposed to crafting a piece of cinematic art, based on a comic book.

But I, of course, am not the intended audience. Having collected comics from the early 80's through the mid-90's my quibbles and critiques are dismissed as those of a fanboy. What the Studios look for is the Hundred of Millions of dollars these movies make them in profit.
Posted by Grung_e_Gene at 3:42 PM

"Any comic book movie with Ryan Reynolds is guaranteed to be bad" Hmmm... Maybe you had to be a Lantern fan to appreciate the movie, but anybody who could capture the essence of Team Oa has succeeded in my book.

But if you're going to talk about Silver Surfer and story arcs they left out, you're forgetting that they would have needed to include his epic battle with Nova! And it wouldn't have been a stretch to pull in Rom the Spaceknight, either...

I haven't seen TASM2, and that GS dies did take me off guard. Not much room after the "spoiler" before the spoil. Not something I was planning on rushing to the theater to see, but from your description it sounds quite problematic. I wonder how many installments this one will get? More than the Tobey Maguire trilogy? The Wikipedia page says numbers 3 and 4 are already planned.

Question: Is Peter Parker still a high schooler in his 30s in this film?

Dervish,
Sorry about the spoiler fail, formatting snafu. I'm guessing the Amazing series is going to go Plus 4, probably ending with a battle against the Sinister Six (albeit a radically different version than the comics). But, with such a poor film and worse US showing for #2 who knows...

As I recall the parents storyline coincided with the Peter Parker Clones of the mid-90's, which was the point I stopped reading Spider-Man.

As for aging Peter Parker, each real year does not correspond to a year in the comics. By the Mid-90's it had been about 6-8 years since High School, eventhough 30 years of real time had passed.

I am not a comic book reader. I was referring to the fact that Toby and Andrew are 30-year-old men playing high schoolers. In the Toby SM he quickly departed high school. I was wondering if Andrew is still in HS in TASM2.

I know nothing about sinister sixes or Peter Parker clones or how PP ages in the comic books.

No problem. Just my mis-spent teenage years in the 80's and early 90's reading comics. :)