Republican Political Power flows from microphone through the barrel of a Gun. 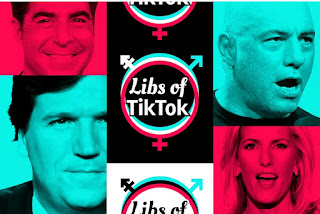 "People should definitely arm themselves, I agree," Tucker Carlson and Christopher Rufo incite stochastic act of terror against the LGBTQ community.
Republicans and Rightwingers have declared War on Americans. Not rhetorical. Not symbolic. But, Acts of Terror and physical violence.

For the simple reason that political power for Republicans flows from the barrel of a gun.  Violence is the final arbiter of political authority to Republicans and Rightwingers.

This should have been clear when Republicans declared the January 6th insurrection, "Legitimate Political Discourse."

But, it's demonstrated time and again whether directly, as when the grandson of a Nazi at the urging of Lauren Boebert, Tucker Carlson, and Chaya Raichik takes his AR15 and murders suspected members of the LGBTQ community at Club Q, and indirectly when human marshmallow Kevin McCarthy declares Democratic Representatives Eric Swawell, Ilhan Omar, and Adam Schiff will be denied committee positions. Swawell, Schiff, and Omar receive an out-sized amount of death threats from conservatives. McCarthy is simply showing deference and acknowledgment that threats of violence and actual violence are the animating principle guiding Republicans.

Despicable right-winger Tim Pool is celebrating this Act of Terror at Club Q.  Like so many of his ilk, Pool reveals in the blood which flows from their discourse. Chaya Raichik is already back at demonizing people in Colorado in the same community in which one of adherents just shot 30 people.

It's what Republicans did to black people (CRIMINALS), leftists (DRUG ABUSERS), Latinos (ILLEGALS), Muslims (TERRORISTS), and originally Homosexuals but, now Trans persons (GROOMERS).  Every decade Republicans set off to demonize and destroy a group of marginalized or powerless people by, inflating them to a Nationwide threat and white reactionaries eagerly absorb the message of hate and seek out those people to harm through direct violence and the election of Republicans who use the power of the state to harm those communities.

Rightwingers are going to murder you.  It's only a matter of time.  Stop pretending it's just heated rhetoric, stop pretending it's mental illness. It's Terrorism and it's designed to make certain people afraid for their lives, and win control of the Government so Rightwingers can then use the awesome power of the state to effect a Mass Murder program.

This is not a proclamation to be as brave as the Trans Woman and retired Army Major who tackled and beat the shit out of the 22 year rightwing domestic terrorist and grandson of a Nazi who shot up Club Q, but a declaration that you've got to be ready because Republicans and Rightwingers are telling each other to murder you.