It's not just Traitor Trump. The entire Republican Party is owned by Russian pimps and gangsters

Okay... It's been known for a long time the Trump Crime Family has been laundering money for the Russian Oligarchs for decades and Trump himself has been a Russian asset since his first recruitment in the 1980's. 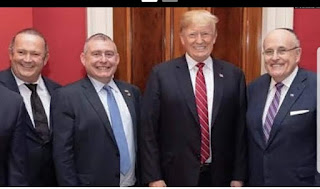 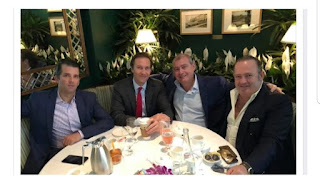 Because, Trump's stupidity and business failures left him without a source of funding the 1990's, but Trump has been is a mob-adjacent grifter for decades so it was natural he would find the the newest rising Criminal Syndicate and get himself in deep with Russian gangsters.

The recent arrests of Two Russian-backed Urkainian spies who had multiple "business" contracts with Trump, Traitor Tot Don Jr, Rudy Giuliani, Paul Manafort, Pete Sessions, Mitch McConnell, Kevin McCarthy, Lindsay Graham, and other Republicans brings it all around. It wasn't only Trump who sold out his country for Russian roubles but The Entire Republican Party.

Recall the Department of Justice and US Senate has declared the NRA was acting as an undeclared Russian-backed foreign agency funneling illicit Russian monies into the campaigns of numerous Republicans.

Now, forget this penetrating the bubble of the #MAGAt Horde they're unreachable and have been for a long time.

Instead what we are facing is the same dilemma which confounded many liberals and Democrats in 2016, can we use the apparatus of government to achieve justice? In reality, this has been the eternal problem facing the left for centuries; can the tools of the Master be used to dismantle the master's house?

Under FDR, Harry Truman, JFK, and LBJ the Democratic Party seemed to make advances using the power of the government to advance justice; consequently this when conservatives decided "Big Government" was the problem with America. As soon as Government could help alleviate the woes facing those who have traditionally been crushed under the Government, conservatives

Now, even though conservatives have hated Government since then, Republicans have not. Instead Republicans set about undermining protections and sharpening the elements of the Government which help them acquire and maintain power and which could be used to undo the Progressive gains of the 20th century. See for instance the bullshit narrative of Antonin Scalia and his "Orginalism" arguments.

Now, Republicans have been more than willing to destroy the American people in the quest to End the American dream and return the 99% to endless Wage Slavery and Eternal Corporate Bondage but, I did not think they would wholly sell out the Nation to their once most hated enemies. But, I admit I misunderestimated the Perfidy of the Republican Party.

2018 was the first steps in retaking the Nation from the rightwing terrorists and Republican traitors 2020 will be the turning point and place upon President Professor Elizabeth Warren the terrible task of bringing the Cadre of Conservative Criminals to justice.
Posted by Grung_e_Gene at 10:31 AM