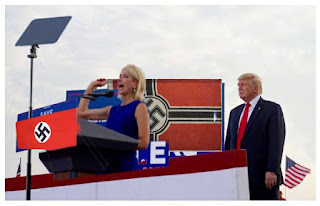 The Chicago Tribune is so genteel.  They defer from calling Mary Miller what she clearly is and instead hide behind the euphemism "string of questionable comments".

On the day before Miller's compatriots stormed the U.S. Capitol on January 6th, in a reenactment of the Reichstag Fire, Miller stood in the heart of Washington D.C. and extolled her savior The Fuhrer, "Hitler was right about one thing!"

Now, the cheap Russian-made Adolf knock-off Donald Trump invaded the state of Illinois, and Miller could not help but declare out loud the Republican Joy at the unjust, immoral, and tyrannical decision by the Supreme Sinister Six;

"President Trump, I want to thank you for the historic victory for white life in the Supreme Court yesterday."

As they say, saying the quiet parts out loud...
Miller is a bog-standard Republican decrying Marxists in D.C. while greedily accepting millions in farm subsidies from the Federal Government.  But, charges of hypocrisy are like Republican thoughts & prayers; worthless.  Republicans like Mary Miller laugh at attempts to shame them just like Miller laughed when 21 people (19 of them children) were murdered by the NRA in Uvalde, Texas.  Republicans love Death & Taxes.
In a footnote to the Dobbs decision, Sammy "Puzzi" Alito cited the George W. Bush CDC report in 2008 that American mothers needed vulnerable women to be forced to carry pregnancies because white women were lacking "domestic supply of infants relinquished at birth or within the first month of life".
Domestic Supply of Infants is a core tenet of The Great Replacement Theory and it's part and parcel of the Modern Republican Party and is exactly what fascist Illinois Nazi Mary Miller meant when she thanked Hair Furor for protecting White Life.
Posted by Grung_e_Gene at 9:09 AM