The Revenge of the Thin Blue Line 24: When push comes to shove which side do you think the cops will be on

I know there are some good feelings directed towards Police in General because of the Jan6th hearings, and the brave, touching, personal stories of Capitol Police Officers Daniel Hodges, Brian Sicknick, Michael Fanone, Harry Dunn, and Caroline Edwards... 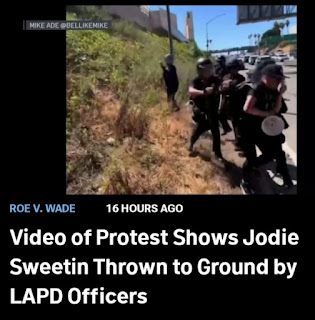 The Police will never side with protests against Reactionary policies because as a body Police and Sheriff Departments at the local, municipal, county, and state level overwhelmingly support rightwing ideology and when tasked with disrupting, dispersing or beating up any Americans engaged in public agitation which contains a whiff of leftist ideation, Police will do so with glee and gusto.

Rightwing domestic terrorism is, of course, coddled and encouraged in the United States.

In Minneapolis, Philadelphia, Portland, Seattle and other cities across the country, Police Forces specifically targeted and abused peaceful protestors.  But, MAGA ignored and cheered this on, while rightwing agent provocateur, committed property crimes which conservatives today still falsely  claim were caused by BLM and Antifa and which Faux News still claims resulted in cities being burned to the ground.

Now, as people mobilize for peaceful protests in response to the Supreme Sinister Six religious edict constrains and denies freedom, life, liberty and the pursuit of happiness for American women, Reactionary forces are assembling to harm them.

If you plan to protest, plan to be beaten, gassed, tased, and possibly shot or run over.  Plan accordingly.