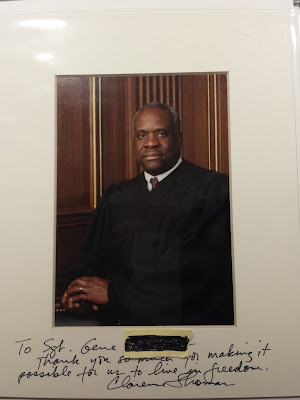 The admirable, but ultimately tragic and sad career of Supreme Court Justice Clarence Thomas just took another dramatic strange twist as his fellow Justice Antonin Scalia plainly stated blacks can not do well in higher education. On page 67-68, of the 113 page Official Oral Arguments in the newly revisited, Abigail N. Fisher vs. University of Texas case, Scalia has this to say,


There are those who contend that it does not benefit African-­Americans to to get them into the University of Texas where they do not do well, as opposed to having them go to a less-­advanced school, a less — a slower­-track school where they do well.

One of the briefs pointed out that most of the black scientists in this country don’t come from schools like the University of Texas. They come from lesser schools where they do not feel that they’re — that they’re being pushed ahead in — in classes that are too — too fast for them.

I'm just not impressed by the fact that ­­- that the University of Texas may have fewer. Maybe it ought to have fewer. And maybe some ­­you know, when you take more, the number of blacks, really competent blacks admitted to lesser schools, turns out to be less. And ­­ and I ­­ I don't think it -­­ it ­­- it stands to reason that it's a good thing for the University of Texas to admit as many blacks as possible. I just don't think ­...

And that is what Clarence Thomas faced when he went to Yale University. Before becoming a Supreme Court Justice Clarence Thomas underwent withering racial bigotry at Yale. He was told he didn't belong there, that he was there simply there because of the color of his skin. After getting his JD, Justice Thomas found rampant racism from Law Firms who dismissed his accomplishments as all being owed to Affirmative Action. As Thomas himself recounted,


"I peeled a fifteen-cent sticker off a package of cigars and stuck it on the frame of my law degree to remind myself of the mistake I'd made by going to Yale. I never did change my mind about its value."

In response to this, Thomas did what so many do when faced with bullies, he adopted the language and beliefs of his oppressors and began to advance the agenda of his racist enemies. To congratulate him for his supplication, conservatives set about getting him onto the Supreme Court and rewarded him with a white woman, Ginni, an ultra-conservative woman rife with her own fascist, oppressive, intolerant agenda.

In gratitude, Justice Thomas has gone along as conservatives stole the 2000 election and created a broad category of rights for Corporations, to enforce their owners discriminatory beliefs, to be free of criminal neglect for their actions, and to place them in position to buy the American Democracy.

As to the Abigail Fisher, she's been at this most likely at the behest of some conservative Svengali, since 2012. What's at play here is the plain white power belief that in America if a black person or minority is given a chance, a job, or a college admission it has been taken away from a more deserving white person. Because the reactionary right-wing bigots believe America is a Zero-sum Game. The right-wing calls of reverse-racism have been building for years and now have reached the Supreme Court. The details surrounding Fisher, that by no metric or standard would she have gotten into the University of Texas, are irrelevant.

It's a chance for right-wing bigots to soothe the anguished cries of undeserving white people. Take Back My Country and Make America Great Again are not even thinly veiled references to a time in American History when undeserving white people were elevated, given jobs, legacy admissions, government support, aid, and assistance simply because of the color of their skin. The only affirmative action White America has ever supported is for unqualified whites.

Conservatives yearn for a time when an ignorant white man was the pinnacle of creation, lauded and revered. This has been the message of Faux News for the last 20 years, and this is the unvarnished message of the 2016 Republican Presidential Campaign. This is the goal of the American Conservative.
Posted by Grung_e_Gene at 9:03 AM

Had to link to this - very good!

Thanks W. Hackwhacker. I always appreciate your voice and the great effort, dedication, humor, wit and wisdom you put into your blog - Hackwhackers.

sounds like scalia is trying to soften the blow: "Yes, racial preferences are unconstitutional, but don't feel too bad about it: you wouldn't have like Yale anyway."

always thinking of the nicest way to let serve his shit sandwiches . . .

Is this a legal argument: "I think that you'd be better served somewhere else."

Sounds like the same arrogant arguments pro-lifers make: "You'd be really sorry it you had an abortion so it's for your own good that it's unconstitutional."

Scalia would have benefited from some diversity in his educational career . . .

Clarence Thomas' career was groomed starting in the early 80's under Reagan with an eye of him replacing Thurgood Marshall on the Bench, the one AA spot. George HW Bush had appointed Thomas a Judge a mere year and a half before his nomination for the SCOTUS. Thomas didn't want to be a Judge at all.

@cheyanne,
Scalia's commentary is so odious. So disgusting. And conservatives don't care because they are so wrapped up in their headlong rush to being a White Power Party who immediately and reflexively proclaim anyone calling them racist is the true racist.

I do not in general support Clarennce Thomas, but Scaglia is truly a nasty little kritter with opinions which education should have removed if his education had been unbiased and well-rounded. He speaks as a plantation owner from the 1850s. Really not later than that!
I read the notes (thanks for link) and did he really interrupted councel to spew this little piece of plegm so the president of the court then had to end the discussions? Vile!

Great post. But that pic is just sheer brilliance!

Unlike, couch borne conservative chicken hawks I have defended my country and community in actual harms way, Cygnus ;)

The average black IQ is 85. Mohammed Ali had an IQ of 79 which psychologists consider to be mild mental retardation.

As a conservative and a race-realist...I know there are exceptions to the rule - but they ARE the exception.

For the record I wish that you were right and I was wrong, but the facts are what they are.