El Paso is rooted like a thicket of salt cedar and cottonwood on the Rio Grande. El río cuts through mountains to make this place a natural passage. That’s what el paso means, the pass. For centuries many different peoples—like ourselves, right now, standing here—have passed through El Paso, going north, going south, going west, going east. On the other side is La Ciudad Juárez, Chihuahua, México. Los mexicanos call this river “el Río Bravo,” and they know, like we know, that we are all brothers and sisters. We breathe the same air, we drink the same water. We are border people. Somos fronterizos. We are without end. - The River/El Rio: both Sides, No Sides by Bobby Byrd and Sasha Pimental

While I hope Beto O'Rourke can capitalize on this and eventually win the Governorship, Texas has been a shit State for a long time because Lone Star Assholes have this theory that since they were an Independent Nation (built on Slavery and the Myth of Remember the Alamo) they occupy a special niche that they can leave the Union whenever they wish.

But, like all Republican States nowadays they don't threaten to secede anymore but, intend to impose their "laws" upon other states, and the American people writ large.

Texans pride themselves on being a private land state, as over 95% of the land of Texas is held privately and over 83% of the property in Texas (142 million acres) is "Working Land" meaning it's farms, ranches, and forests.  But, almost every Republican bureaucrat who hails from Texas is All Hat and No Cattle as the saying goes... Such as little lord Briscoe Cain, who wears sweat free Stetsons and Wrangler work shirts inspired by David Byrne's oversized suit, who's taken to threatening Citigroup with criminal prosecution for "Abortion funds". 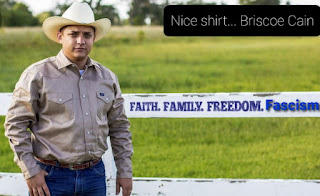 Greg Abbott and Ken Paxton hatched scheme after scheme to fuck things up in Texas and blame The Biden Administration.  Abbott's inspections were so farcical, on top of unlawful, the Texas Troopers under the Department of Public Safety weren't checking anything other than tire pressure because rules about search warrants and 4th Amendment protections still exist in Texas (for now).

So even though the American Trucker Association called for an immediate cessation to blocking imports of food shipments from Mexico and Texas companies told Governor Abbott to knock it off I have no doubt this plan will work.  Because Abbott and Paxton took a media blitz to Faux News to Let's Go Brandon and chortle at how brilliant their plans were and rightwing media loved every moment of the harm and farce.

Paxton is still facing numerous criminal fraud charges having engaged in felony after felony for Trump with the expectation of receiving a Presidential Pardon from Trump after Paxton had other states electoral college votes voided.  Criminal Paxton filed a lawsuit to have Georgia, Wisconsin, Michigan, and Pennsylvania award Trump their electoral votes.

And if you've been paying attention, this is the current scheme Republican States have adopted to undemocratically enforce their will upon other States.  And thanks to Trump appointed Judges, especially but not only on the Supreme Court, Republicans have Judicial Supremacy enforcing the rightwing agenda on States they don't control.  Couple this with voting suppression and Republicans expect that taking back the House and Senate in 2022, will lead them to Republican State Legislatures declaring Trump the winner in 2024 no matter what, after they've successfully impeached President Biden.

This type of Bureaucratic Warfare from the GOP is expanding and accelerating.  The Banana Republican Party will keep pushing forward to take America backward because Republicans don't care about polls, or legality, but the exercise of raw power and the unequal enforcement of laws.  Fascism is already here and it's picking up adherents, lookie-loos, and late adopters.