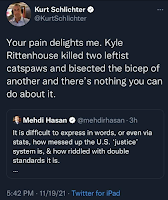 I certainly hope Senators Manchin and Sinema enjoyed their 10 months of spotlight.  Because... because the Rittenhouse verdict feels different.  It feels like the Inflectional Point.  The Jan6th Trump Coup Attempt conducted by conservative criminals and insurrectionists feels like it was the priming of the pump and the Injustice from Kenosha was the pull of the starter cord.

The palpable malevolence oozing from the Right on-line has an almost quantifiable difference than the Trump years with it's rallies and "Lock Her Up" chants.

Without a doubt there are elected Republicans who absolutely believe "Second Amendment Remedies" are completely at their disposal.  While other Republicans will restrain themselves to just using the gerrymander, voter intimidation, voter suppression and the byzantine archaic rules and precious norms of the House and Senate to establish Fascism.  But, it's the rightwing domestic terrorist organizations who now are openly talking about murdering Us.

These Paramilitary organizations, who rose from the 1990's Anti-Clinton militia movement and 2010's Anti-Obama Teabagger terrorists, and of course trace their origins back to the Slave Catching Patrols and KKK, have the scent of blood and the belief that now it's legal.

Maybe... maybe it's nothing. More big tough guy talk on Twitter.  Kurt Schlichter is nothing but a big mouth shit talker.  I don't see him having the sociopathic stones to pick up Rittenhouse's torch. But, post January 6th such on-line chatter can't be dismissed.  If a bunch of Proud Boys go on a death squad mission, stop "suspicious" cars, and execute suspected "Antifa Terrorists" or are "forced" to defend themselves from those murderous BLM Thugs, who's going to arrest them?  The Portland PD?  The Oregon State Police?  The DOJ or FBI?

Remember the FBI, the most reactionary anti-civil liberties agency in US history, is not Reactionary enough for the modern Trumpists.  What the Proud Boys, III Percenters, Boogaloo Boys, et al want to do is replace existing Law Enforcement.  Which is what Fascists have always done.

Thank you for sharing your thoughts. I really appreciate your efforts and I will be waiting for your further post thank you once again.
Regards,
Online Dissertation Help