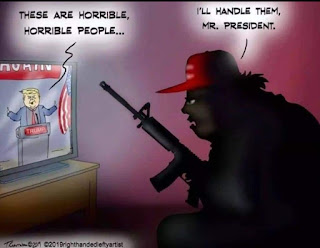 Trump is not a smart man but, he does know where his strength lies and how to keep himself popular; by throwing raw racism and hatred to his #MAGAt Horde.

Conservatives long ago tired of the racist dog whistles which satiated their parents, instead they demanded outright racism in their candidates. In 2008, John McCain balked when presented with the opportunity "Obama is an Arab" and in 2012 Mitt Romney considered himself far too genteel to stoop to outright bigotry.

But, not Trump. He's has been a racist bigot since the 1970's and he knows what tune the rubes he's playing want to hear.

Trump supporters have already killed and attempted to kill dozens of people and he's already skirted past the 'won't someone get rid of these meddlesome Democrats' with his tweets. Twitler's latest call to Violence involves a new defamation of Representative Ilhan Omar,


Rep. Ilhan Omar (D-Minn.) today called on Twitter to take action against President Donald Trump’s account and remove a tweet in which he shared a false claim that Omar had “partied” on the anniversary of the Sept. 11 terrorist attacks.

“They have a responsibility and they set community standards and clearly the president has shown many-a-times that he has violated their community standards,” she told POLITICO. “I don't even know why his account is not fully suspended — why he's not deplatformed.”

Don't expect Twitter to do anything about it, as a platform Twitter was specifically designed for The Fash, Russian bots and Identity thieves to use.

Trump's Horde is primed for him to outright call for Violence against the Non-#MAGA but, he continues incite the individually unpredictable but statistically predictable acts of Stochastic Terrorism with his syphilis addled tirade sand tweets.
Posted by Grung_e_Gene at 4:28 PM