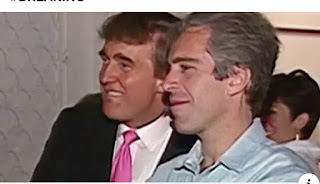 Donald Trump looked upon the carnage of 9/11 in the way he leered at underage girls...

But, worse than Traitor Trump celebrating the attack are his absurd claims to heroism,


"Soon after, I went down to Ground Zero with men who worked for me to try to help in any little way that we could.."

Donald Trump's lies about his actions on 9/11/01 would seem to be the bridge too far for even mendacious conservatives. But, it isn't... 9/11 supposedly changed everything. In reality, it just made clear the disjunction in The United States. Conservatives true enemy are the American people and they have declared war on the Progressive era and liberal state.

In such a war conservatives side with any other group of rightwingers across the globe, be they the Taliban or Putin's oligarchs.

“Of course it’s legal – it’s war,” the Ghoulish Giuliani answered, laughing. “Until the war is over, anything is legal.”

9/11 was a failure of Republican governorship. But, conservatives weaponized their failure, embraced their fascist heritage,  and mobilized for war against the people they truly hate... Americans. The #MAGAt Horde is yearning, aching waiting for Trump to give them the order to round-up and murder millions of people.
Posted by Grung_e_Gene at 3:16 PM