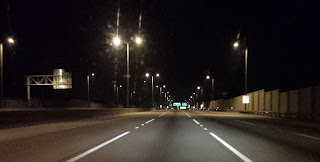 You know what?!? You think too much!

Nobody ever told me that before... ~ Sean Bean and Bobby Money from Ronin (1997)

Like all the Gen-Xers my youth in the Chicago and the suburbs of 1970s, 1980s, and 1990s was framed by an amber glow. These lights along the highways, alleys, and streets of the City and her suburbs operated on High Pressure Sodium Vapor lights, first developed by General Electric in 1965.

Ubiquitously, installed across the Nation during the energy crisis of the 1970's, the orange glow is my preferred color as I drive into work during the early pre-dawn or through the dark winter nights of the early sunset. But, as with the gaslight of the 19th century, new (and better?) technology has emerged for lighting large areas; the LED.

Chicago is undertaking the largest street light modernization program of this century. Over a quarter million high-pressure sodium lights are going to be replaced by LED street lights by 2021. There is an interactive map showing the progress thus far along with frequently asked questions.

I began moving towards CFL bulbs in my home over a decade ago, but resisted the LED bulbs. The light emitted was far too harsh. This has also been my experience with LED headlights on vehicles and the early LED street lights, as well. The issue was the "blue light" from 5000 degree Kelvin bulbs which produced LED light dubbed "Daylight". The use of these bulbs produced far too much light pollution as well when simply swapped into existing light poles.

To counteract this the Chicago Smart Lighting Program, "thoroughly researched the issue and relied
on the guidance of experts, including the U.S. Department of Energy, the American Medical Association, and the Illuminating Engineering Society. Based on this guidance, the City is requiring all LED light fixtures used in the CSLP be “soft white” (i.e. have a Correlated Color Temperature of 3000K) and are designed to focus light downwards on streets and sidewalks and limit light trespass into people’s homes and the night sky."

The new LED lights are going to produce far better light coverage on the streets and sidewalks and save millions in energy costs a year for the City, eventually suburbs and the rest of the State. But, in wistful moments I'll miss the orange-lighted memories of the past.
Posted by Grung_e_Gene at 7:41 AM