A lot of people are saying it was the greatest fake orgasm by a president, maybe ever.

Move over Honest Abe, slide outta your two-man bed James Buchanan, tell Ms. Monroe to warm her throat up because we have a new champion at 1600 Pennsylvania Avenue. The vile thing occupying the White House is the new champion of fake sex.

In the Pantheon of Trump's most despicable moments, the time he mimicked a disabled person stood supreme (Link goes to a Magat Defense of Trump claiming it was Fake News). None thought a more vile or deplorable display could be or would be seen. The media sought to ignore it as they threw thousands of free hours of publicity at the creature and waited for the moment when they could write the definitive piece; Today Trump, truly, became President. Yet, everyday Trump strutted and pranced in the Limelight as he sought a new heights and greater applause and thus December 1st 2019, a new crowning achievement was realized. For Trump, live in front of an audience of thousands faked an orgasm.

A monumental grotesque moment from the Lord of the Grotesqueries 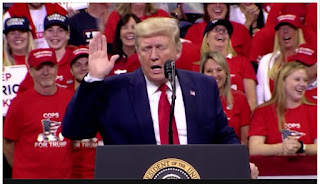 Look at the faces of the women behind Trump as he pantomimes an imagined sexual encounter. Recall that Trump was a frequent conspirator with Jeffrey Epstein, most likely, sexually abusing the same young girls with Epstein. Trump has been accused of raping a child, sexually assaulting multiple women and is being sued by two of the women he abused. Now look at those women's faces again. Laura Nazigraham chortled all night about this... Because the Magat Horde fucking love this. Trump's vile antics excite them and enervate them in a way no other Republican has since Ronnie Raygun.

Do you recall how aghast conservatives were when Janet Jackson's tit and weird nipple ring were thrust upon their poor unsuspecting children during the 2004 Super Bowl halftime show? Well every sanctimonious right-winger who claims the LGTBQ community is a danger to children in bathrooms can fuck off forever. I never want to hear their hypocritical moralizing about dignity from an elected official. The Magat Horde not only tolerate but love this Grotesquerie they have foisted upon us. A Racist. A Rapist. A Traitor. The degradation of the Presidency is complete.
Posted by Grung_e_Gene at 5:43 AM