The Revenge of the Thin Blue Line 29: Trespass not against Me! I Trespass against You!

Police Officers are usually poor lawyers. Now, this isn't a question of smarts, but of the lack of attention to details and general belief in their own superior understanding of laws even if they haven't read them. Back in the Marines I used to call this thinking "Barracks Lawyering", it's an ardent belief in something you once heard or some guy once heard in reference to a rule or procedure.

To wit: The Illinois SAFE-T Act has changed trespassing to a ticket! Poor people are going to set up campsites on your front lawn! Even, a cursory reading of the law indicates there are several provisions in the body of the reworked language which gives the officer a significant amount of latitude to arrest the person and remove them from the "Real Property" instead of ticketing them and leaving. Not to mention other laws like Obstruction of Peace Officer, in which a Peace Officer can lawfully order a person to leave a property.

But! But... that gets to the crux of the issue. A significant number of police officers chafe and become petulant when faced with direction, supervision, and accountability. The exact things the SAFE-T act was designed to address. And underlying this is a lack of self-awareness, reflection, and an absolute inability to place themselves in the shoes of another.

Reading various additions to the ILCS, Officers scoff and proclaim well I would never do this or that, and refuse to believe this or that is happening elsewhere.

For instance, this addition was made to the Use of Force,

(c) The authority to use physical force conferred on peace officer by this Article is a serious responsibility that shall be exercised judiciously and with respect for human rights and dignity and for the sanity of every human life.

Of course, grumble the almost all white Officers policing almost all black communities. But, I read that addition not as superfluous but as the I was just following Orders addendum. You see no Officer wants to believe they could possibly be the bad guys, that they would act as storm troopers, that they would simply follow inhumane orders. That events would overwhelm their natural instincts and moral code as the engage in indiscriminate unlawful use of force.  That they, would be the Nazis. 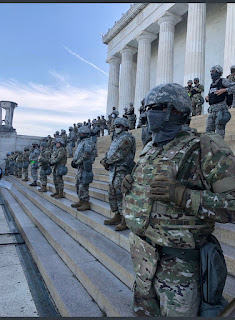 Yet, what did we see in Philadelphia during the 2020 protests? Officers indiscriminately using force on everyone they saw.