The Cubs and the Ricketts Family Curse 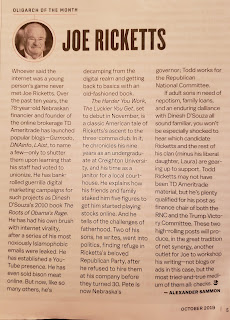 As the World Series draw near the Astros will make their 2nd appearance in 3 years, it's time for Chicago baseball fans to resurrect the time-honored eternal lament Wait till Next Year. And to recognize for all the talk about "every season is sacred" the Chicago Cubs are more than willing to coast and cash-in on the dying embers of the 2016 Championship for the Cubs fans must face the truth the "vaunted" World Series Window hath closed.

It's also time to note that while WSCR 670 The Score calls this the greatest era in Modern Cubs History, in reality the Cubs have not made the Playoffs for the last two seasons. The Theo Epstein-Jed Hoyer brain trust is chock full of Hubris, believing the hype that they are the smartest guys in baseball, they've overvalued their own players, made terrible decisions in Free Agent signings, and now need a new manager because they ran the last one out of town.

Now, this is nothing against any player on the Cubs, I wish them nothing but good luck in getting as much money from the Team and sport they can before the harsh Ricketts family ownership and wonder boy Epstein jettison them.

But, in reality I have not been a Cubs fan since the odious Ricketts family descended upon Chicago like a plague of locusts and got control of the Cubs in October 2009. Joe Ricketts is the TD Ameritrade Patriarch who made his fortune the old-fashioned way; by siphoning off money from people, like the blood-sucking tick borne disease which is their namesake

In 2007, Sam Zell another ruthless and worthless "investor" acquired the Tribune Company using the financial trickery of a "leveraged buyout" dumping Billions of dollars of debt onto the Tribune Corporation and then selling off the valuable assets; i.e. the Chicago Cubs. The Ricketts Family took note and implemented "Project North Side"; a complicated scheme of chicanery and inventive bookkeeping using the purposefully shady, complicated, and byzantine banking rules to buy the Cubs without actually having the assets or cash-in-hand.

With the Cubs purchase Joe Ricketts, an unabashed racist, felt no compunction in running 6 straight losing seasons with cut-rate players maximizing profits and now after 1 World Series Title, setting up as many revenue streams as possible to drain the Cubs Fanbase of dollars. Next season the Cubs will remove their games from TV onto their "Marquee Network", a pay-per-view channel.

Like, most of the Corporate Vulture Class, Joe Ricketts got rich spending other peoples' money. Then congratulated himself on his "work ethic" and set about using the Awesome power of the Government  to crush the Working Class. After winning the World Series, Ricketts worked to get Trump elected, ever since the Cubs have lost.
Posted by Grung_e_Gene at 11:59 AM