The Fascist Next Door 5: Twitter is for The Fash 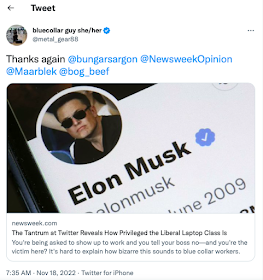 One of the necessary skills Americans need to cultivate is reading gang signs and symbols.  Now, because of the relentless Copaganda campaign from local, state, and federal law enforcement, Americans are conditioned to read the word "gangs" and think blacks and Hispanics.  Also we could blame the 1990's Blood In, Blood Out and South Central but, the gangs which really threaten the United States these days are Rightwing Paramilitary organizations.

And the thing about Rightwingers is they reveal in flashing their gang signs out in the open and having the normies not pick up on it.

Let's start with our Twitter persona pictured here.  This "person" wrote an op-ed on the Liberal Laptop Class rejecting Elon Musk's request they work hard at Twitter.  But, read the nom de'plume, "blue collar guy she/her @metal_gear88".  I am going to interpret this for you; it's a thinly veiled Arbreit Macht Frei Heil Hitler.  Remember, right-wingers giggle and love inside jokes while maintaining a thin veneer of deniability.  Note also the childish addition of she/her for a "blue collar guy" and the GamerGate adjacent reference to Solid Snake (SS?) with the "metal_gear". 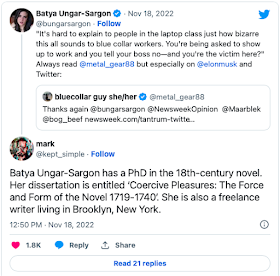 So, was it a lack of understanding whom she was sharing or was it purposeful when disreputable, anti-progressive, Corporate Media handmaiden Batya Ungar-Sargon decided to amplify this person's diatribe for Newsweek, a publication which has rapidly descended into anti-worker pathos and apologia for Corporate Bondage.  Batya Ungar-Sargon herself is quite an example of the pampered class of Lügenpresse, who do the work of the Corporate masters, believing their work will spare them from the trains when the time comes for Us.

Musk, himself, is undoubtably Fash Curious and Fash Friendly.  It's been noted that Musk has gone out of his way to respond to Neo-Nazi Twitter accounts, which he doesn't follow, but whose posts he apparently seeks out.  And of course 3 weeks ago, the Neo-Nazis, bigots, and other assorted rightwing trolls immediately began to flood Twitter with their bile, vitriol, hatred, and disinformation.  It's apparent the Twitter accounts flourishing are Crypto-Cons, Neo-Nazis, and bots.

Fascinatingly, this was not only predictable but, predicted by the interesting Englishman Tom Scott in a speech he presented to the Royal Institute in 2019, called there is No Algorithm For Truth.  I've included the presentation for your viewing pleasure; jump to 46:22 for the last third which includes the chapter titled Nazi Bars.  It incorporates the exact trajectory for Twitter under Elon Musk.

So, as always... get ready.  Get knowledgeable about the symbols and signs around you.  Be prepared because Rightwingers are openly and proudly displaying their ideas and goals.  And those goals are your subjugation or elimination.
Additional:
BTW, after doing household chores I decided a few hours after writing this to do a cursory glance at "blue-collar guy she/her" and this popped up, 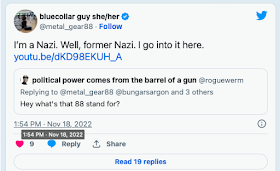 Look, rightwingers are yearning to unleash their inner fascist.  They are waiting for someone in the Republican Party to give the Go Ahead.
Grung_e_Gene at 10:44 AM
Share