Rightwingers embrace violence and fascism as Republicans attack Paul Pelosi and call for the Assassination of President Biden, his son and Congresswoman AOC

A mere day after I pointed out we are on the cusp of Era of Rightwing violence by individuals as well as The State, a MAGA terrorist attacked Paul Pelosi.  In response, rightwing twitter was ecstatic, orgazmic, and vile.  Responses ranged from invoking Jussie Smollet, DUI, to har-har San Francisco gay gay gay, to Pelosi Defund Gotcha. 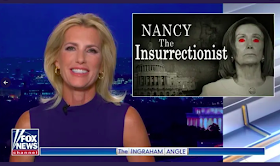 Understand this was an attempted Assassination of  Speaker Nancy Pelosi. For years Republicans have conducted a concentrated propaganda campaign to blame her for Republican perfidy.  Just last week Sebastian Gorka claimed the recently revealed January 6th footage of Nancy Pelosi proves the Insurrection was a Staged Fedsurrection!  And as part of his campaign of lying about his election loss, Trump crafted (and rightwingers adopted) the claim that Speaker Pelosi was responsible for Capitol security and indeed she stopped the National Guard and Capitol Police from being there.  It doesn't matter how many times this is disproven Rightwingers believe it.
Every Republican running for the House of Representatives is running against Speaker Pelosi and invoked her name during their debates this election season.  But, this agitprop campaign against Pelosi goes back years.  I am not some prognosticator.  Instead it's been easy to read and listen to what Republicans and Rightwingers had euphemistically alluded to but have loudly stated since January 2021; they yearn to be unleashed to commit state-sanctioned mass murder.
And the Trumpublican Party of Cotton, Cruz, Hawley, Boebert, Gosar, Gaetz, and Greene is chomping at the bit to give them the wink and the nod.  In 2020, during the Portland protests, multiple slimy Republicans including Chad Wolf, Ken Cuccinelli, Brian Murphy pressured members of the Department of Homeland Security to create dossiers on every protestor and claim all the crimes and damage was “Violent Antifa Anarchist Inspired," and were being conducted at the behest of a high level Antifa mastermind.  Even as we know many of the actions were the work of far-right white supremacists specifically creating chaos so as to blame "The Left".  Understand that even today, many rightwingers simply assert, often in the face of proof and evidence to the contrary Portland and every other city were burned down by Antifa and BLM.  And yes what this shows is the planned use of Federal Law Enforcement to push and conduct operations based on preconceived political biases while also providing Trump and Republicans cover to push propaganda.
Now, rightwing media is going to go into obfuscation mode as they allege the perpetrator is actually a leftist, and don't you know a Cuban Republican was beaten by leftists in Florida, and Supreme Court Injustice Boofer O'Kavanugh was almost murdered to death by a leftist, and Pelosi didn't condemn Rand Paul's neighbor because right-wingers lying about rightwing terrorism provides cover for more rightwing terrorism to continue.  Let me repeat:  Republicans and Rightwingers are coming for your very lives.  Get fucking Ready to defend yourself.
Like I've said Vote and convince someone you know to vote and someone you are acquainted with to vote because 2022 has sliver of hope to delay the advancement of Republicans at the State and Federal level.
Because as Republicans seek the Trifecta of Federal Power, their radicalized terrorist base will continue the "lone-wolf" attacks of Democrats until such time as Republicans can get the state-sponsored mass murder machine up and running.  Yes, I mean literal concentration camps.  Prepare to defend your lives because Republicans and Rightwingers are coming for them.
Grung_e_Gene at 4:12 AM
Share