"You’ll get more out of me,” the billionaire Leon Cooperman said, “if you treat me with respect.”

From the No Kidding Files,

According to researchers at the University of California at Berkeley, people in lower socio-economic classes are more physiologically attuned to the suffering of others than their middle- and upper-class counterparts. 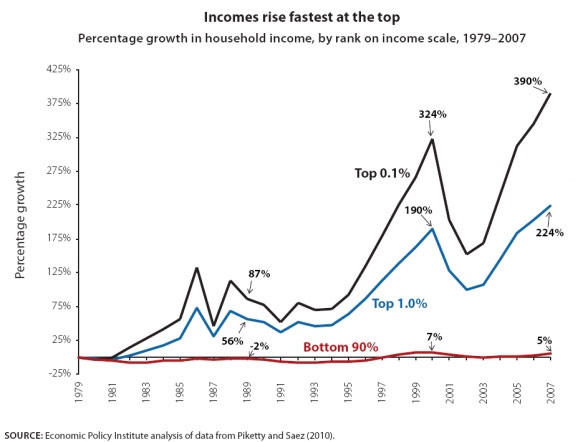 Ask any historian, even one as evil and corrupt as Newt Gingrich about the Rich and Poor and you will see that the entire canon of recorded history is one of those who have wealth setting up elaborate systems of thought to justify their position, their oft-times illegally, unethically, or immorally gained riches. "What they [the Poor] lack is the richness of spirit." - Stuart Varney, Faux News.

Why do you think "I Get It" was the phrase Frank Luntz emphasized as most important to the assembled collection of out-of-touch, effete snobs he coached at the Republican Governor Association meeting earlier this month in Florida?

"Gordon Gecko" of Wall Street and "Patrick Bateman" of American Psycho weren't aberrations to these bastards, they were role models and guides.

Wall Street is fixated on stealing as much money as possible from where ever possible and making their thefts legal and protected by the biggest baddest thugs (The Republicons) they can find;

"Whether it’s the EPA, the FDA, the FCC, the SEC, the CFTC, you name it, there is an acronym for a federal agency causing harm right now. We’re trying to pull that in." - Eric Cantor, Republicon Hit Man for the Plutocracy and Defender of the Transfer of Wealth.

Do you think the 1% give a shit about your job?

To the Plutocrats 'Job creation' is an unfortunate by-product of Wall Street Thievery. If the 1% could find a way to make money... Oh Wait! That is what the entire Bush Presidency was! A time where the 1% increased their share of wealth, when 2 out of every 3 dollars of income growth went to the Elites, squeezed as much loot as possible out of a rigged "Capitalist" system and then got the Bush Government and Federal Reserve to give them over $8,500,000,000,000 dollars to cover their losses.

Related:
Capitalism at it's Finest! $7.77 TRILLION for the Banking Criminals [Disaffected]
Your Moneyed Masters are Getting Angry with You America [Disaffected]
American Capitalism is Medieval Feudalism [Disaffected]
Republicans Love when Miners Die [Disaffected]
Posted by Grung_e_Gene at 4:11 AM

Email ThisBlogThis!Share to TwitterShare to FacebookShare to Pinterest
Labels: classacre, don't believe in capitalism, empathy, frank luntz, Piss Down Your Back, plutocracy, the 99